Just a quick recipe...something I've had bookmarked for a while and finally tried using a large zucchini from the garden. These cakes are crunchy outside and creamy inside. 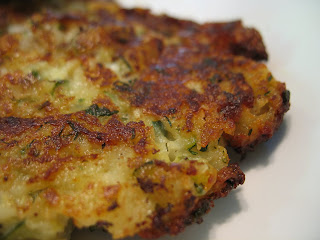 I really like the idea of these cakes. I will have to try them. They sound and look really good.

Oh my, I know I'm going to love these! They look so delicious.

Good old Nigel. Funnily enough I never make anything from that book even though I have it. I think it is because of the diary structure- I go looking in books for a principal ingredient which you can't really do with this book. I keep seeing other bloggers make stuff from it and then go "That looks great- oh, what, I have that book!" I must remember this for when Iext have too many courgettes.

Ooooh! A new zucchini cake recipe!!!!
I've never done it with precooked zucchini - but anything with feta!

I just made something so similar it is uncanny. Our taste in food is just so similar there is never anything I don't love on your site. Too bad I am up here in Canada or I would take your classes:D