I've been a "Featured Publisher" with FoodBuzz (now DailyBuzz Food) since December 2007. One of the perks of this relationship is occasional offers to try products, sample menu items, and review cookbooks. I usually decline such offers (unless it's for a cookbook, as I'll always say YES to free books), but when asked if I'd try some of Panera's new soups I gladly agreed (I do like Panera, which started out as the St. Louis Bread Company, though I don't eat there often).

So, as part of the DailyBuzz Food Tastemaker program, I received a gift card and stipend from Panera to do so. All opinions, however, are my own. 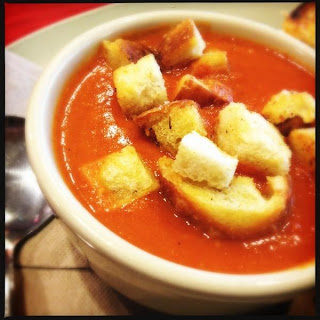 According to the Panera Soup Stories webpage, they use whole pear tomatoes in this soup for a more intense flavor, less bitterness, and a nice texture that's not just a smooth puree. The soup is topped with asiago croutons, which are meant to mimic the flavors & textures of a grilled cheese.

I was happy with my choices; the soup is boldly flavored (instead of tasting like watery tomato juice, a curse of many tomato soups) with a generous topping of croutons. It made for a satisfying & comforting dinner on a cold November evening.

* * *
Can't make it out to a Panera to try their new soups? Then, make some of your own at home! Here are some of my favorite soup recipes:

By now, you've all heard that Hostess has gone out of business, stopping production at their plants and selling their assets. According to the Hostess Brands website: "In addition to dozens of baking and distribution facilities around the country, Hostess Brands will sell its popular brands, including Hostess, Drakes and Dolly Madison, which make iconic cake products such as Twinkies, CupCakes, Ding Dongs, Ho Ho’s, Sno Balls and Donettes. Bread brands to be sold include Wonder, Nature’s Pride, Merita, Home Pride, Butternut, and Beefsteak, among others."

The closing is noted as the result of a union workers' strike. However, it seems as if Hostess has been struggling for a while. I would think it was in part due to a backlash against overly-processed, high fructose-laden foods. Steve Ettlinger's book Twinkie, Deconstructed certainly didn't help, I'm sure.

While I don't typically buy or eat Hostess snack cakes, the closing makes me a little sad. It really is the end of an era. It's a little weird to think that future generations won't know what a Twinkie or a Ding Dong tastes like (ah, nostalgia)...unless we make them ourselves.

Last year, I made homemade Twinkies for my College English class. We were studying food issues; we watched the documentary Food, Inc. and read excerpts from Ettlinger's book. I wanted my students to realize how bad fast food, processed foods, and sugar was for them. So, I brought in a box of Twinkies (which are made of 37 ingredients) to compare with my homemade version. Everyone thought the homemade cakes tasted better; the "real" Twinkies were just too sweet and sticky.

I really miss family holidays. I fondly remember going to my grandma & grandpa's house in Mt. Olive, Illinois, the night before Thanksgiving. We get up really early in the morning to put the turkey in the oven, then Grandpa would make eggs-in-a-cup (coddled eggs in coffee cups) for breakfast. They'd let me drink coffee, before I was even ten years old.

I'd watch my grandma make dressing with lots of torn-up white bread, celery, onions, sage, and turkey broth. I'd help pop cranberries in the old metal grinder for her infamous cranberry salad. These two dishes were my favorites, and I usually still make them each year. 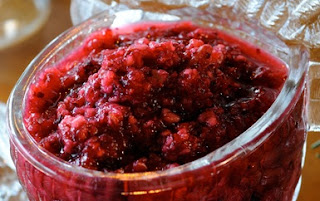 Grandma's recipe looks just like this one from The Food Channel, even though they have different ingredients.

It simply doesn't seem like Thanksgiving without this side dish.
More like a relish than a salad, this is what my family always served instead of cranberry sauce.

1 bag fresh cranberries
2 red-skinned apples (like Jonathans), cored & cut into wedges
1/2 cup sugar (or more to taste)
1 cup pecans, chopped
This also makes a great relish for turkey sandwiches...and you can make some tasty cranberry muffins with the leftovers!
at 9:44 AM 0 comments
Labels: fruit, holidays, salad

It seems as if the holidays are officially upon us. Thanksgiving is next week (already?), and I noticed today that Santa will be arriving at the mall on Saturday.

This year, I'll try to focus on the aspects I enjoy about the holidays...namely the food. And the booze.

Here is an easy, no-bake dessert that's perfectly acceptable for your upcoming holiday meals. It's quick to assemble & requires overnight refrigeration, so it's great for making the night before a dinner party or family gathering. 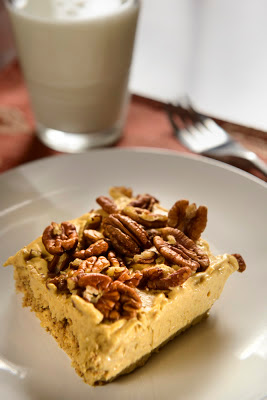 I'd never made curry paste from scratch, so I tried this recipe recently. This makes a soupy kind of curry, perfect for serving over rice or rice noodles. Be careful not to cook the stew too long after adding the green vegetables, as they will start to gray if overcooked (as you can see in the photo).
This is a fairly mild curry, but you can spice it up by adding more peppers to the paste (or using 3-4 serrano chiles instead of jalapenos) and adding more spicy to the finished stew. 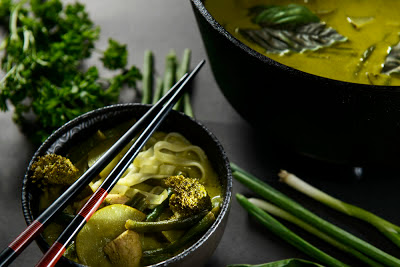 Dinner tonight was some kalamata olive hummus (via Trader Joe's) with pita chips and a bowl of stovetop rice pudding...something warm and soothing on this cold and dreary pre-election evening.

Rice pudding is traditionally made by either cooking raw white rice and sweetened milk in the oven for a couple hours or cooking the raw rice and milk on the stove, then slowly adding beaten eggs and sugar. I've even seen recipes that call for simmering cooked white rice with milk and spices.

Those recipes have never appealed to me. Rice pudding as always ranked low on my dessert spectrum, right below tapioca pudding. I just don't want chunks in my should-be-smooth-and-creamy sweets. That is, until I saw Nigella Lawson's version.

The Domestic Goddess's recipe is essentially a sweet risotto (which seems to make a lot of culinary sense to me). Caramel-coated arborio rice is cooked slowly with warm milk gradually added and finished with heavy cream and vanilla. I sweetened mine with honey (instead of sugar) and threw in some spiced rum-soaked raisins at the end. 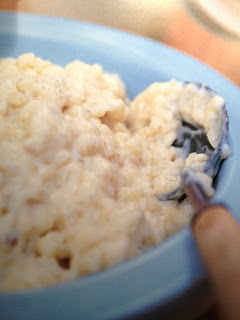 Nigella Lawson writes: "For those days when you just can't wait the three hours for proper, old-fashioned rice pudding, this is what you need. In fact, it's just a sweet risotto, with warm milk substituted for the stock. This does mean that the rice takes longer to cook--and what's more, you want it rather less al dente than is usually desirable--but it's the best I can offer. Anyway, you can't, on eating this, resent one moment of your stoveside-stirring captivity."

My new menus include a wine pairing class with wine distributor Kyle Harsha (January 12), a rum inspired couples class (January 20), & a pie-baking class on Pi day (March 14). I'll also be repeating my newest kids' class, which will make foods from the Hunger Games (including homemade goat cheese), on February 23.

Hope to see you there!

at 7:08 AM 0 comments
Labels: cooking classes