I roasted some chestnuts last weekend in an attempt to get into the holiday mood...you know, the whole "chestnuts roasting on an open fire" thing.

Roasting chestnuts. *sigh* It seems like such a swoony, romantic thing to do. Yeah, well, in reality...not so much.

I roasted the chestnuts in the oven instead of over an open fire. To do so, you cut an X into the rounded side of the nut. Then, roast them (cut side up) at 350 degrees for about 20 minutes. Peel the chestnuts when they are cool enough to handle. 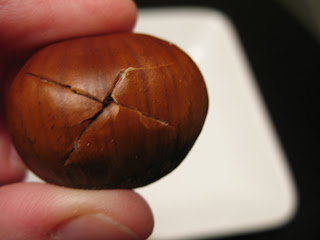 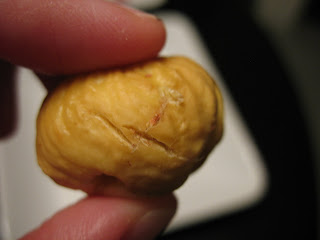 Roast chestnut, peeled.
The warm chestnuts are tender and sweet, but they were not something I enjoyed just eating by themselves. So, I asked my tweeps (my Twitter followers) for suggestions of what to do with the rest of the chestnuts. Emphatically, several people replied and told me to try chestnut soup.

I browsed recipes online and settled on two choices: Mark Bittman's Roasted Chestnut Soup and Food Blogga's Creamy Cauliflower Chestnut Soup. In the end, I decided to go with Susan's (aka Food Blogga) recipe because it was heartier (ie chunkier...I'm not much of a smooth soup kind of gal) than Bittman's.

Excited, and with printed recipe in hand, I got home from school yesterday to discover that I didn't have any cauliflower like I thought I did. So, I improvised and made... 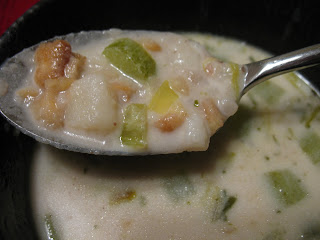 Sounds great! I've never had chestnuts in a soup before.

Oh my god, I wish I would have checked your blog over the weekend. I made chestnut butternut squash soup, but I didn't slice the little x in them. They exploded. Everywhere. Seriously, the neighbors are now giving me that whole look like "Is everything alright between you and Jon?"