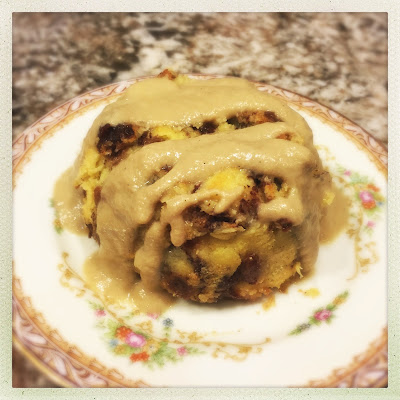 On Sunday, I cooked a Downton Abbey-inspired supper to celebrate a friend's mom's birthday. Here was our menu:

In the 5th episode of Downton Abbey, the cook Mrs. Patmore refuses to make an Apple Charlotte for dessert, as request by the lady of the house, because she was having problems with her eyesight and couldn't read the recipe.

Apple Charlotte is essentially a caramelized apple filling baked in a French-toasty crust. In my research, I saw many different versions and methods. I chose a recipe posted on the Downton Abbey Cooks blog that uses raisin bread for the crust and condensed milk for the caramel filling. The bread is dipped in an egg & milk batter, which results in a bread pudding-like consistency. (Confession: I don't think I followed the "lightly dip" directions well. I probably should have just brushed the bread.)

In hindsight, I think it would have been better to brush the bread with butter and toast it in the oven, then brush only the tops of each Charlotte with the egg mixture. This would make for a crispier crust that held up better.

Another suggestion: Don't forget to grease the ramekins. It was difficult to get the desserts neatly out of their dishes. Whoops.

Still, these individual desserts make for an impressive presentation, and everyone seemed to like them. 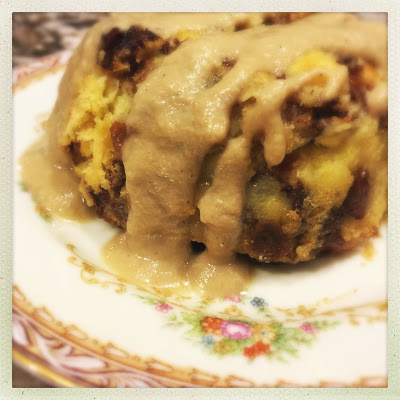 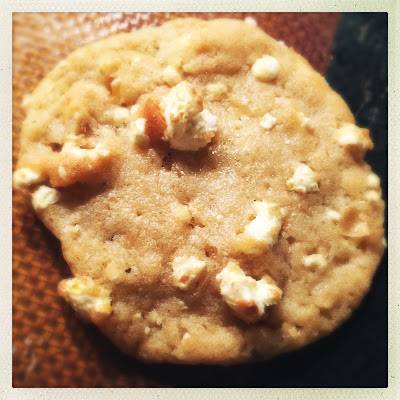 So, the semester is more than halfway over. It's been a good school year. I like my classes, for the most part anyway. My stress level is fairly low, except for the new teacher evaluation procedures. This year, 25% of my evaluation is based on student progress. I have to assess my students three times from September to November on the writing standards I've chosen to focus on. I have to chart their scores, determining how much I think they can improve in the two months' time. After the post-assessment, if at least 80% of my students meet their learning target, I get an "excellent" for that part of my evaluation.

This isn't making me a better teacher. In fact, it's making me less effective since I'm spending so much time focusing on the assessments instead of the rest of my curriculum, and I'm falling behind in my other grading.

It's all frustrating me, but my students are aware of why they are taking these assessments and I've been honest with them about the outcomes so far. Thankfully, they are understanding and cooperative.

Because it's time-consuming for them, too, I made a little treat for one of my classes this week. I didn't have any chocolate chips or whatnot for traditional cookies, but I did have some popcorn....so popcorn cookies it was!

These are quite buttery, but salty and sweet and really good. 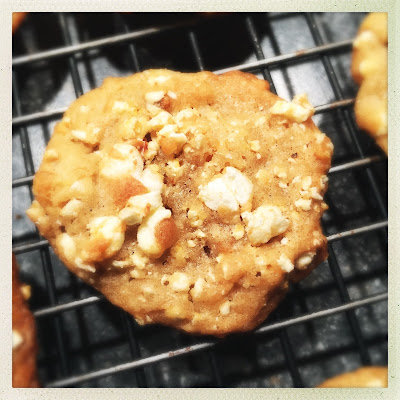 I'm teaching a few demonstration classes: Girls' Night Out classes out on a champagne-laden menu on December 19, Korean food on February 20, and a dip extravaganza on March 19.

My Date Night for Couples classes include a beer pairing on December 7, an ultimate cocktail party on December 20, a salsa dance & dinner class on January 23, and a chili cook-off on January 31.

My Valentine's Day class is on February 6 and features soufflé with lobster sauce & seared scallops with champagne-balsamic glaze.

Below is my schedule. To register, call Kitchen Conservatory at 314-862-2665 or register online.