THANK YOU to everyone who's been voting for me in Project Food Blog. I didn't make it to round 4, but that's okay. I wasn't happy with my last post, so I wasn't surprised by the results. You see, I had people over on Saturday for my "luxury dinner party," drank too much champagne since I was celebrating my birthday, & woke up too late on Sunday (the day the post was due). I spend the entire day nursing a headache, editing pictures, and writing the post. I knew something was missing; it just didn't feel complete. But, since the deadline was looming, I submitted what I had. Of course, the next day I thought of a few other things I could have added to the post to make it better.
Nevertheless, I'd planned ahead just in case I did make it to the next round...which was a photo challenge. I actually made couscous-stuffed whole branzino last Monday, but I wasn't impressed with my photos or the recipe itself. So, I had an idea to make homemade dog treats and let my pups "help." My friend Corey was kind enough to take some photos while we were cooking.
Don’t let his big brown eyes & floppy ears fool you; Arlo’s kind of a pain in the ass. In fact, right at this moment his barking his head off in my ear at nothing in particular. At least he’s not chewing something up. Like my shoes, FIVE pairs of which he’s already destroyed. 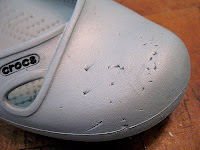 This puppy will eat anything. He’s shamelessly swiped a hunk of brie off the counter and once even devoured an entire stick of butter at the blink of an eye. The only remaining evidence was the greasy schmear around his mouth.

But, despite his annoying behavior, I love that damn dog. He’s almost 9 months old, so he’s still learning how to be a big dog. And, he’s come a long way in the 5 months he’s lived with us. Luckily, he has his “big brother” Lewis to lead him in the right direction. 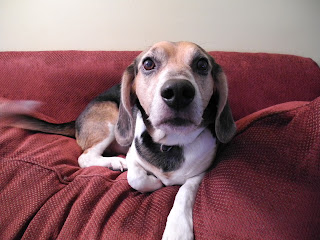 We often have to put Arlo to “bed” while we’re cooking and eating dinner, because he’s just tall enough to reach his head onto the big butcher’s block in the middle of our kitchen. He’s a quick bugger, so it only takes him a second to grab food & high-tail it out of there.

However, I thought it would be fun to bake some homemade dog treats and let Arlo & Lewis help me by licking the mixing bowl & beater clean. 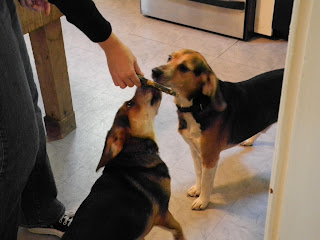 Arlo was pretty interested in what was going on from the very beginning, from measuring out ingredients... 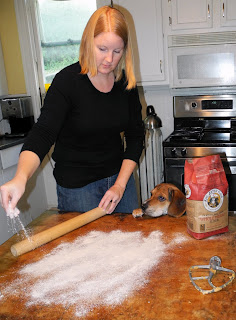 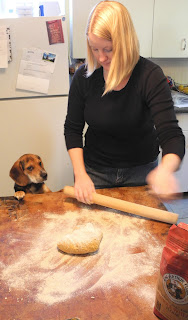 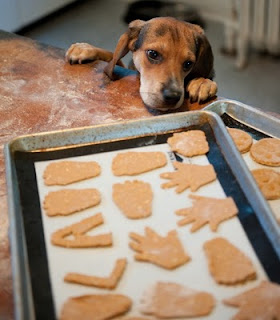 He did not, however, like the rolling pin much...

I’d never made dog biscuits before, so I did my research and discovered that several recipes contain special ingredients like wheat germ and brewer’s yeast or ingredients I don’t really want to feed my dogs like white flour.

I finally decided on a recipe from Delish that uses only whole wheat flour, oatmeal, pumpkin puree, peanut butter, eggs, a pinch of salt, & a little water. The dogs LOVE these treats, so much in fact that Arlo was eating the raw dough when I had my back turned! 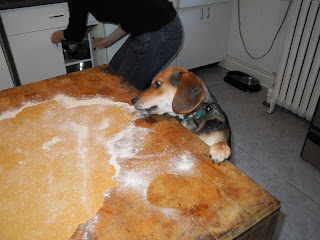 He also tried to swipe a treat before they were cooled. Sneaky bastard! 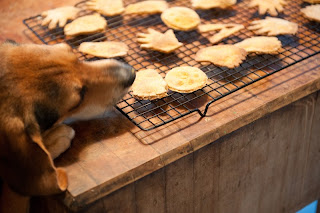 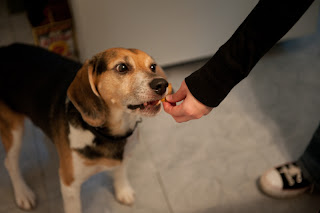 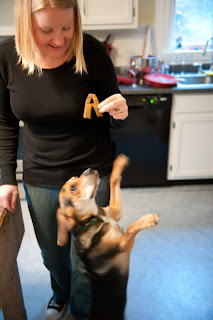 What cute pups! OK, you have inspired me (once again!). I am going to try and make these for Stella! :D (sorry that you didn't make it to round 4 -- I was rootin' for you!)

LOL! Love the pics! I'll have to try to make some for my pups soon.

These pictures are so adorable! I love your blog name by the way... my English teacher in high school had a bumper sticker that said "I sound my barbaric yawp". So awesome.

What cute pictures!!! And adorable dog names :) Arlo and Lewis :))) My family has two vizsla's and they get into everything! We've lost shoes, blankets.. even whole sticks of butter! Its a wonder theyre still alive! Next month is my roommates pups birthday.. I might just have to make him these!

Gotta love a pup that has a bit of mischief in him. Thanks for sharing the pics and recipe!

What a great recipe! I'll have to link to it on my facebook.

Looking forward to making these!!

Love all the pics of Arlo watching (and attempting to sneak) your every step!

My cats love chewing on our crocs - guess those shoes are an amimal's dream!

I don't have a dog, but if I did, I'd certainly make these. Are you going to be posting a cat treat recipe next?

These look great! I'm making them this weekend. Do you know if I can add a touch of nutmeg and other spices? Or will that upset their stomachs?

Also, do they have to be eaten in a certain amount of time due to the eggs? Thank you.

I'm not sure about adding extra spices. I don't think the recipe needs it, though. My pups liked these treats as they are.

I just stored them in a ziplock bag. They should last as long as regular cookies.

Thank you! I made them last night and he loves them. I'm going to mail some to relatives, too. Thanks for posting the recipe.

I just made these and my dog has gone insane! He really likes them. I didn't add any water - I eyeballed the pumpkin wrong so I had to add a little extra flour. I also used rice flour because it is gentler on dogs tummies than wheat.

I have had this recipie saved as a favorite for a VERY long time, and for the first time will be making this tomorrow. I am very excited. I may add some flax seed and brewers yeast as well, but not sure....

Do you use any variations of this recipie still?

I've not made any variations, but I'm sure you could add whatever you'd like!

Looks like Arlo's a beagle!! If so I know how you feel. I have 2 beagles and I love them to pieces but there sneaky little buggers! My boy Prince tries to always steal food by sticking his tongue out at far as it can go and lick something off your plate or off the counter. I am definitely going to be trying this recipe out!