This week's recipe for Tuesdays with Dorie was chosen by......ME!

I wanted to pick something that we haven't yet done (they did muffins in January before I joined the group) and something seasonal (at least seasonal in the mid-western United States, where I live).

My short list of choices included the cardamom crumbcake, salt & pepper shortbread, rice pudding, All in one holiday bundt cake, cocoa almond meringues, sweet potato biscuits and coffee-break muffins. Ultimately, though, I decided to go with the pumpkin muffins. I liked Dorie's description at the beginning. I also thought this recipe would allow for many substitutions or alterations.

Several of the TWD'ers used dried cranberries instead of raisins or different kinds of nuts. Many people added chocolate chips with rave reviews. Joanna spiked hers with bourbon (my kind of girl!). Leslie suggested adding candied ginger (brilliant!). I made mine as Dorie's recipe said, but added chocolate chips after reading the suggestions!

Most everyone seems to like these muffins, even those who admitted to not liking pumpkin previously. I, for one, thought they were fabulous! 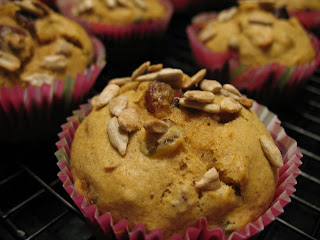 
The best pumpkin muffins in New York are made by Sarabeth Levine, the mistress of Sarabeth's jams and the founder of Sarabeth's restaurants. Her muffins are big and spicy, packed with raisins and topped with sunflower seeds. They're so good they out to be the standard for all pumpkin muffins in the world. Like the originals, these are a beautiful orange-gold color and have a moist and tender cakey crumb, a gentle spiciness and the hallmark sprinkling of sunflower seeds across their crowns. They are good minutes out of the oven, at room temperature or split and toasted. And while they're luscious on their own, they're even better with a little butter and a lot of orange marmalade or apricot jam. 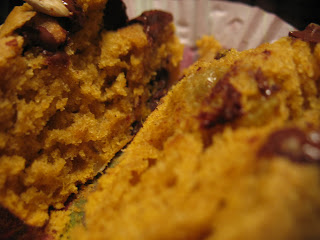 at 12:01 AM
Labels: cakes/cupcakes/muffins, Tuesdays with Dorie

Thanks so much for choosing this delicious recipe Kelly! Todd and I both loved them. I did as you did and kept to the basic recipe. I did toy with the idea of adding things or making a few taste changes, like the candied ginger, but then thought to myself . . . why mess with perfection!

Okay, so that was an awesome pick. I mean, I love the coffee break muffins, but these are a close second in the muffin category. Perfect for the weather too.

I absolutely loved these, it was my first time of using pumpkin for baking/cooking. Thanks for picking this recipe and giving me the chance to experience new things!!!

Thanks for the great pick! It was perfect for the season!

such a great choice for this time of year! can't wait to see your photos.

Great choice Kelly! These were fabulous!

These were a super good choice! They are disappearing around here quickly and will get remade with the ginger and chocolate chips soon. Thanks for picking them

These sound delish! I think topping them with toasted pumpkin seeds would be an awesome way to finish them off, as well.

Have you taken any of the community classes out at L'Ecole Culinaire? I worked there when they first opened, and they used to have amazing one-course classes with their faculty and guest chefs from the STL...

Thanks for choosing this. Perfect! I left out the raisins, lowered the cooking time, and topped with pine nuts.

This was such a great choice, Kelly! Definitely one of my favorite Dorie recipes yet.

Thanks for picking this recipe.

You know, with all the TWD bloggers, it's really hard to get around to reading too many. But I just spent a good 20 minutes reading your blog, and it's going to be a new staple for me. Great writing, great personal stories. Thanks.

And thanks for choosing the pumpkin muffins. They are the bomb-o.

Good choice...they were a big hit around here and will appear on the table for Thanksgiving morning breakfast...we will think of you!

great pick, Kelly! :) glad you enjoyed it. looking forward to seeing your pics!

This was a great pick! I had already made them earlier this year, but liked them so much that I made them again. Although, I have been eyeing the cardamom crumb cake too!

Wonderful recipe for this season! Sounds like so many people really enjoyed them. Great pick!

Great recipe choice! I really loved them. Thanks Kelly!

Thanks for picking the pumpkin muffins! Great for October. I did bake Dorie's coffee muffins when I first borrowed the book from the library. They came out wonderful as well, although I do suggest good quality coffee.

Thanks for a great recipe choice, Kelly. These might have been skipped if I wasn't part of this group. Glad I made them.

Great pick, thanks for hosting!

Thanks for picking a winner Kelly! These are a keeper. Delicious!

Thank you for the great choice in recipes. It's that time of year for pumkins!

thank you so much for choosing this! It was one of my favorite things so far that I have baked on TWD. I love pumpkin anything!

Perfect time of year for these wonderful muffins! Great pick, thank you!

Can't wait to see your pictures! Thanks for picking this recipe. I probably would never have picked it on my own. They were yummy!

Thank you thank you for choosing this recipe. I would NEVER have made this on my own, it did not sound appealing to me at all. But that's what I like about this club, it gets you to come out of your box and step away from your comfort zone. I LOVED these muffins. I am not a pumpkin fan, but these were just delicious. I did substitute milk chocolate chips for the nuts and I didn't use the sunflower seeds, instead I dotted the top with a few chocolate chips, on the other half of the batch I drizzled some melted chocolate. Yum yum yum!

Thanks for picking muffins. They are so easy, and so tasty, and so easy to eat. Mine didn't turn out too well, but I think it was due to old spices. Yours look good. Glad they were yummy!! I am going to try again.

The muffins are fabulous. Great choice!

Thanks for choosing this week's recipe! I loved trying another pumpkin baked good!

These were great! Thanks so much for choosing this recipe. It gave me an excuse to roast an entire pumpkin, how can that not be a good thing? :)

I thought the muffins were fantastic! thanks for a great choice!!

Kelly, made mine Saturday morning and they are gone...of course. They are Dorie originals, with a few twists and turns. Hope you enjoy yours too. Thanks so much for choosing the Pumpkin Muffins at this time of year.
AmyRuth

these were a great breakfast treat! thanks for the pick!

Thanks for a fabulous pick! These were awesome :O)

Thank you for such an fantastic recipe Kelly! I love your blog. I made mine with a cream cheese and chocolate filling, boy were they fantastic!!!

Great pick this week! I love pumpkin so I was excited to make these!

This was a fabulous choice--pumpkin muffins are (almost) always good, but I thought these were an exceptional example. Thanks for a great pick!

Kelly, thanks for picking these muffins! Even though mine turned out a little funky, I love all things pumpkin and can't wait to give these another go. All the nuts and fruit inside were so yummy, and of course chocolate chips could only be a good thing.

Your muffins are so cute- and thanks for choosing the recipe! I posted late but only because I had so much fun I forgot the "point" of TWD! (I hosted a cupcake decorating party.) Thanks!

Thanks for such an amazing pick! Before these muffins, I would never think to ever eat a pumpkin muffin and I've already made these twice!!

Yum! I stumbled upon this recipe, and I'm glad I did! Thanks also for the note about the timing. 17 minutes was perfect for my muffins.