You may have noticed that I have this thing for comfort foods, particularly nostalgic comfort foods. Sometimes, I crave the foods from my childhood...and not necessarily always Grandma Green's homemade noodles or Grandma Martin's cabbage rolls.

Sometimes, I crave the foods that I haven't eaten in 25 years and probably wouldn't even like today...like the Chef Boyardee pizzas made from that kit-in-a-box. My dad used to make those for us all the time, and I loved them....the little pepperonis, the packet of powdered cheese. I bought a pizza kit for dinner once when I was in college. I was so excited because I'd remembered those pizzas being so yummy. My roommates, on the other hand, were very skeptical. The pizza turned out bland and chewy, and I was so disappointed. (Though, we did end up eating all that pizza after a night out at the bars....and it tasted pretty good then!)

My friend Stephanie, whose father also used to make those pizzas for her, recently wrote about her memories of that particularly nostalgic food.  I'm a little afraid to revisit those foods I loved as a kid, for fear that they won't be good and it will destroy my whole idea of good and evil, right and wrong...

Ok, maybe I'm being a little over-dramatic. I just don't want my good memories to be clouded by my current food-snob self.

Another nostalgic food for me is the spaghetti from The Old Spaghetti Factory. It was my favorite place to eat when I was growing up (well, there and Red Lobster). I would order the Pot Pourri, a 4-sauce sampler with mizithra cheese & browned butter, a rich meat sauce, a creamy white clam, and a marinara sauce. The mizithra cheese and clam sauces were my favorite. (I unsuccessfully tried to recreate the mizithra dish several years ago.) I haven't eaten at a Spaghetti Factory in nearly 16 years, and I'm sure I'd be disappointed in the food if I went today.

Nevertheless, I've been wanting to make white clam sauce at home for a while. I've never had clam sauce except at OSF...and I'm sure that today I'd love pasta with whole clams in a garlic, winey sauce. But, I'm saving that for a more special meal.

Instead, I was craving that creamy sauce I had when I was a kid, so I picked up a can of whole cherrystone clams at Trader Joe's and decided to try to recreate (and update) the dish at home. I found several sources online that touted the "original" Spaghetti Factory recipe. I used that as my base and tweaked the seasonings & method just a little.

The result? PRETTY GOOD. I would make this again (though, I would probably use fresh clams from Bob's Seafood in St. Louis). Since I used canned clams, it was...well...pretty clammy tasting. I balanced that with some lemon, pepper, and fresh parsley.  The key here is to mix the clams in at the very end, with enough time left to just heat them up, since they are already cooked...any more time on the heat will result in over-cooked, rubbery clams. 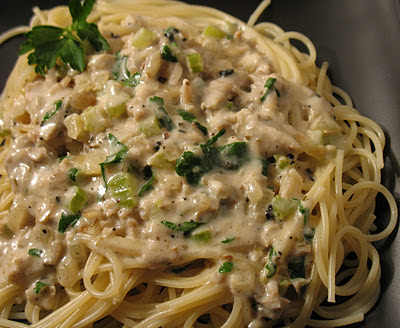