Updated: This is damn near the best pie I've ever made. Seriously perfect. 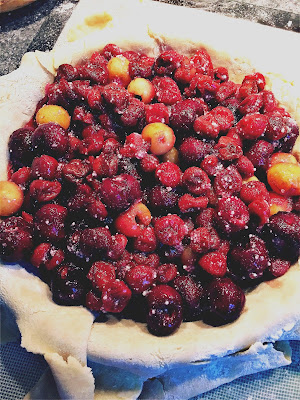 Last week, I thawed out the remaining sour cherries from last summer's harvest. I had a couple bags of fresh cherries in the fridge, and I wanted to make a quick pie with all three varieties.

Yes, it's near 100-degree temps in St. Louis right now...I know it's crazy to turn on the oven in my 115-year-old house that only has central AC upstairs.

But...but...pie-baking always makes me feel better (and with the world as it is now, we could all use something to feel better about...if even it's something small for just a few moments). #peacebypiece

Besides, I can fit a full-sized pie plate in my toaster oven. ;-)

So, I said this was the best pie I've ever made. It's true. The filling was the perfect consistency, thick and "gooey" (for lack of a better word). The cherry pies I've made in the past were always too liquidy inside. This time, however, I used quick tapioca instead of flour or cornstarch. It thickens the juice better and doesn't taste so pasty. If you haven't tried this ingredient before, I highly recommend it. I will do this from now on in all my berry pies.

Triple Cherry Pie
adapted from Art of the Pie 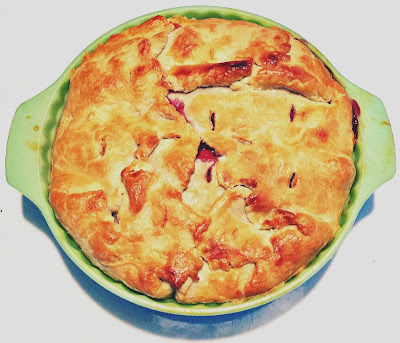 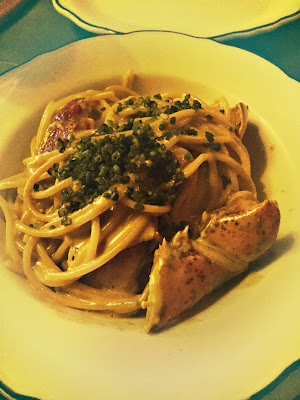 When we ate at Joe Beef in Montreal earlier this year, one of the best dishes we tried was the Spaghetti Homard-Lobster (pictured above). In their cookbook, the Joe Beef guys explain, "We take this name from an old Iron Chef episode when the host declared 'Battle Homard Lobster!' Yes, homard and lobster mean the same thing (like 'minestrone soup'). Among other things that don't make any sense: this is probably the most popular Joe Beef dish."

I'd been ogling the recipe before our trip and was excited to try it. However, by the time the TWO pasta dishes arrived--after FIVE other courses--we were so full that we could only take a few bites. Almost immediately, we talked about recreating the dish at home.

I used 3 medium-sized lobster tails instead of a live lobster. I cooked the tails, pulled the meat out, then used the shells to make the sauce in the same water that I boiled them in. I think I used too much cream, though, as my dish was a bit too saucy. No worries, though, because it was still pretty delicious. And I kept the extra sauce to eat with more pasta later. 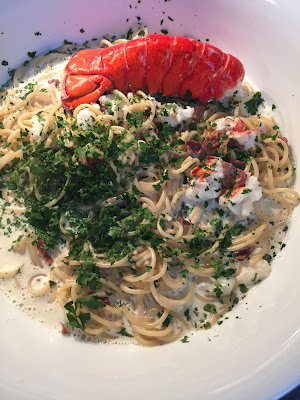