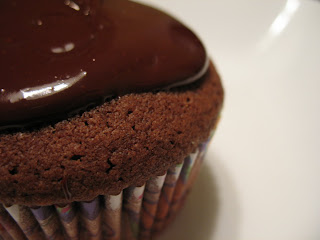 That's how I've been feeling lately. Just...ugh. I'm simply exhausted...in every sense of the word.

At least it is finally fall here in the mid-west. The weather is cooler, and leaves are changing colors.

I find myself turning to comforting foods when I feel ugh-ly...and when I'm cold in this drafty old house. I think, with the shorter days and with waking up while it's still dark outside, my seasonal affective disorder is starting to kick in.

Therefore, I am hoarding the chocolate cupcakes (chosen by Clara of I heart food 4 thought) I made for this week's Tuesday with Dorie event. I'm not sharing. I need the comfort. 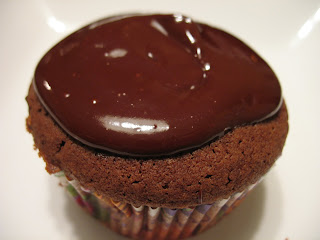 I followed Dorie's recipe and took her suggestion of filling the cupcakes with marshmallow fluff. Several TWDers complained that the cupcakes were too dry. I didn't find this to be true at all, though they were on the crumbly side. I baked them Sunday night but didn't frost them until last night...and I almost didn't frost them. I thought they were pretty good without frosting.

The frosting is a new recipe for me. It's made by mixing melted chocolate with a little bit of powdered sugar and cold butter. It's really more of a glaze than a frosting, that's thin enough to spoon on. As the glaze sets, however, it become thick enough to spread. 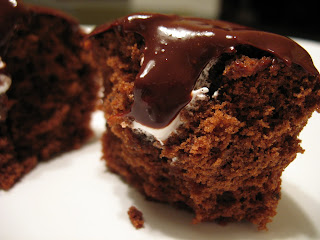 The frosting was still a bit warm,
so it was runny when I broke this cupcake open.

at 6:57 AM
Labels: cakes/cupcakes/muffins, Tuesdays with Dorie

I love how your icing just kind of oozes on the cake.

Great photos of the cupcakes!

I hope that you stop feeling ugh soon.

Looks YUMMY! Glad you liked them. Mine were a little dry. Nothing that a filling won't cure next time!

what is it about this time of year... everyone is frazzled ;) so am i! your cupcakes look like the perfect escape! i will probably use the fluff next time :)

I know how you feel - that's how I've been the last month or so. Hopefully hoarding the cupcakes will help :)

Wow your photos are so mouth watering. This looks delicious.

Your icing looks so good! I hate that ugh feeling. Hopefully these picked you up!

Hope things look up for you soon. Chocolate should help! I love the one with the runny glaze...YUM!