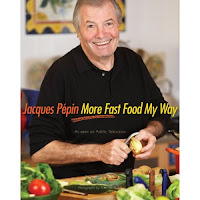 He was actually very funny--in his purple pants, orange shirt, and tweed blazer--telling stories of how he got into cooking (his mother & aunts owned restaurants), his television shows (he's done so many!), and his opinion of celebrity chefs (he was very complimentary: "Whatever gets people cooking!").

In talking about meeting and working with Julia Child, he told of how when filming an episode of their show, Julia would tell the producers..."We are going to cook, and we'll tell you when we're done." They once cooked for several hours, he said. The producers had to edit it down to less than 30 minutes.

I was last in line to get my book signed, and the woman before me insisted on talking to Jacques for a while, telling him all about the baking contest she's won and how she got her son to try new foods when he was younger by saying that Julia Child was his aunt. The assistant had already given Jacques my book, and he had already signed it. I quickly sat down next to him for a picture. He looked at me, I introduced himself, shook his hand, and asked for a picture. He looked at the camera, but quickly looked away after the pic was snapped...because that woman was STILL talking to him!

I didn't get a chance to take another--better--photo. So, here I am with Jacques Pepin...in all my blurry, closed-eyed glory. At least I look happy! 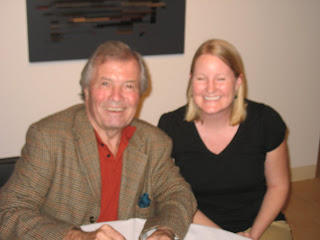 I just came across your blog for the first time today, love it! The title is brilliant.