This summer, I bought a pound of fresh "Young Chicken Livers" at the Tower Grove farmers' market. I thought I'd make pate, or saute them, or at least fry them up. But, I never did. I stuck the livers in the freezer.

The thing is...I don't really like liver. Fried chicken livers are okay; I can stand to eat a couple every once in a while. I really want to like pate, but I haven't been able to stomach many that I've tried so far (except the Chicken Liver Terrine I had at Niche earlier this month. THAT was damned tasty...rich & meaty).

Friday night at Kitchen Conservatory, the class made a chopped liver crostini. It was also very tasty...flavorful with none of that icky liver-i-ness.

So, tonight I thawed out those fresh young livers (doesn't that sound naughty?) and used them to make this: 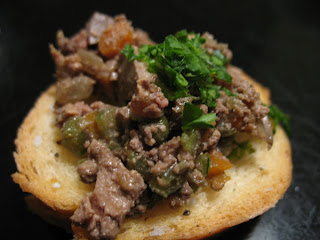 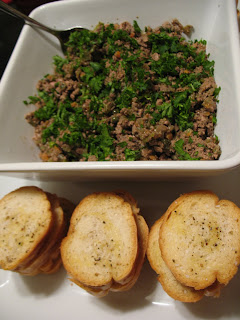 at 8:12 AM
Labels: chicken/turkey, snacks

These look good. Thanks for the heads up. Long story short, my draft wasn't working and I ended up pre-posting tons of stuff as you saw. I didn't even realize it until I saw your comment. Thanks again. I'll pop back on Tuesday.