Do you roulade? You should. All the cool kids are doin' it.

"The word roulade originates from the French "rouler" meaning "to roll". Typically, a roulade is a European dish consisting of a slice of meat rolled around a filling, such as cheese, vegetables, or other meats. A roulade, like a braised dish, is often browned then covered with wine or stock and cooked. Such a roulade is commonly secured with a toothpick or metal skewer, piece of string or twine. The roulade is then sliced into rounds and served. [...] The second most common form of roulade consists of a souffle-type mixture baked in a flat pan rolled around a filling. Appropriate to the meaning of the word however, a roulade may refer to any such "rolled" dish, such as sushi, and is not limited strictly to the European dishes."

Culinate is currently featuring a recipe for Fennel-Stuffed Roast Pork Loin with instructions on how to butterfly a boneless pork loin in preparation for stuffing and rolling.

Last weekend, I made a turkey breast roulade stuffed with sauteed leeks. The recipe came out of Tyler's Ultimate cookbook. It was easy to prepare, the meat was juicy & tender, and it made for an impressive presentation. I am very happy with this dish, and I think I'll make it for Thanksgiving again next year instead of roasting a whole bird. Though, this is easy enough to make anytime with a whole chicken breast.

The original recipe (below) calls for golden raisins & dried apricots, but I omitted the fruit. I also sauteed the leeks in bacon fat, because I was out of butter. 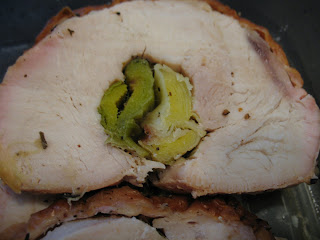