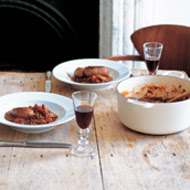 Last fall I made a lentils & sausages recipe from Nigella Bites

, a recipe that says to cook the lentils with onion in water, cook the sausages separately with wine & garlic, then add the sausages “and their garlicky, winey gravy” to the lentils. Sounds good, right?

The lentils were bland, and the sausages didn’t create enough “garlicky, winey gravy” to add anything special. I don’t know if the recipe or my ingredients were to blame; I used standard supermarket-brand brown lentils & smoked turkey sausages with sun-dried tomatoes. I was so unimpressed with it that I didn’t even bother to blog about it.

I vowed to try another sausage & lentils recipe some day.

Well, that day was Tuesday.

I made “Sausages with Salami & Lentils” from The Kitchen Diaries: A Year in the Kitchen with Nigel Slater

(the recipe featured on the cover of his book as pictured above), and this time I used green French puy lentils & fresh Italian sausages from Whole Foods.

Before I give you the recipe, let me explain how much I adore Nigel Slater. I read his memoir Toast

What I love most about Slater’s writing is how he describes food. For example, he includes a recipe for “a lovely, wobbly mayonnaise” in Appetite. He loves preparing food, and it shows in his writing. He’s very inspiring.

Of his warming, satisfying take on lentils & sausage, he writes:

A rough-edged casserole that gives the impression of having been cooked for hours, but which is pretty much ready to eat in 45 minutes. You could put it in the oven if you prefer, in which case you should let it cook for about an hour at moderate heat. This is the sort of food I like to put on the table for Saturday lunch, with a bowl of rocket [arugula] salad by the side. Then you can swoosh the salad leaves around your plate to mop up the last bits of tomatoey lentil sauce. Serves 2 with seconds.