What a weekend I've had so far! Yesterday, I woke up to news that my 96-year-old grandmother had passed away. Then, it snowed 3 inches or so in St. Louis. The roads were pretty slick, and I got into a little car accident on the highway. It was a fairly expensive version of bumper cars. I had to have my car towed since the battery died in the 2.5 hours that I was stranded on the side of the road.  So, I scrapped all my weekend plans and moped around the house instead, spending most of my Saturday evening watching old episodes of Julia Child's The French Chef.

One of my favorites is "The Potato Show." It's obviously an early episode, as Julia is so young-looking and the video has a grainy,vintage quality.

My favorite part is when she says, “There’s a whole clove of garlic in the press, and it goes CREEEAK all over the stove but into the potatoes, too." In classic Julia fashion, she's hunched over the too-short counter. She doesn't finish sentences, fumbles around the kitchen, seems a bit out of breath, sometimes forgets steps or ingredients, & quickly switches from one recipe to another. It's as if she is a caricature of herself. Watching Julia Child cook is like watching someone cook at home. She's messy and real, not sterile like today's cooking shows.
But, isn't that what makes her so endearing?
Well, that and her unashamed love of butter. In this episode, when she adds heavy cream and butter to mashed potatoes, she tastes, shakes her head & states, "Good. Nothing like butter."
"The Potato Show" episode was made famous by the movie Julie & Julia; it's the episode where Julia flips a potato pancake all over the stove. She puts potatoes in pan to make a mashed potato pancake, flips it & misses the pan, scratches her head, then declares, “Well, that didn’t go very well.” The original scene is pretty much exactly like Meryl Streep's remake. Julia does flip a large shredded potato pancake later, stating "I’m going to flip this, by gum.” This time, it goes well.
In a later episode of The French Chef, Julia makes "the soup that made the onion famous." (Interestingly, French onion soup was Julia's last meal before she died of kidney failure in 2004). Though this is still early in the series, Julia seems more confident.
Julia puts the finished soup in an earthenware casserole dish.  She adds a few tablespoons of cognac, grated raw onion, and sliced Swiss cheese (sliced on a box grater) to “give it that nice, stringy quality.” The dish is topped with toasted croutes, grated Swiss & Parmesan to cover the toasts, and a drizzle of melted butter or olive oil.  It's then baked for 30 minutes, then broiled just to lightly brown the cheese.
There is smoke coming out of the oven when she browns the cheese.  “I think that possibly browned a little too much,” she admits. The camera doesn't zoom in for a close-up right away. Later, however, when she's ladling soup at table, you can see that it's definitely burnt! She doesn't apologize, just as she taught us to not be ashamed of our kitchen mistakes.
SOUPE A L'OIGNON
(Onion Soup) 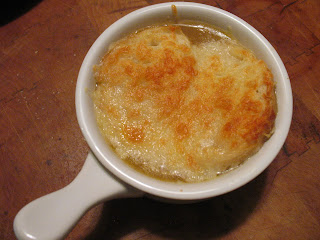 The onions for an onion soup need a long, slow cooking in butter and oil, then a long, slow simmering in stock for them to develop the deep, rich flavor which characterized a perfect brew. You should therefore count on 2 1/2 hours at least from start to finish. Though the preliminary cooking in butter requires some watching, the actual simmering can proceed almost unattended.
For 6 to 8 servings
1 1/2 pounds (about 5 cups) thinly sliced yellow onions
3 tablespoons butter
1 tablespoon olive oil
1 teaspoon salt
1/4 teaspoon sugar
3 tablespoons all-purpose flour
2 quarts beef stock (homemade, of course)
1/2 cup dry white wine or dry vermouth
3 tablespoons cognac
Rounds of toasted French bread
1-2 cups grated Swiss or Parmesan cheese
If you are making individual bowls, it's easier to top each of the rounds of bread (still on the baking sheet after an initial toasting) with a heap of cheese & broil until melted, then place one or two toasts on top of each bowl of soup.
at 11:40 AM
Labels: soup/stew

I love Julia Child. She’s a big reason for why I got interested in cooking.

French onion soup is a great recipe, and you’ve done a nice job with it. I don’t make this soup very often, but when I do I tend to cook it in a Dutch oven (something that’s pretty enough to bring to the table). To finish it, I simply float the toasted bread rounds on the top of the soup, cover with the cheese, then broil. Then I bring the whole shebang to table and serve it forth.