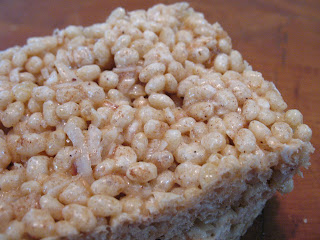 What is wrong with people? I'm sorry you got such a snarky comment. Keep doing what you're doing because you are doing a great job.

Geez, you'd think any food blogger worth her salt would make her own rice crispies from scatch. You actually bought them at a store? What kind of half assed operation are you running here? I could reproduce these on my blog in a second. :-)

Right? I am so, so sorry that I didn't make my own rice crispies from scratch. I am such a food blog failure. Next time, I'll grow my own spices, too. Can you believe I actually BOUGHT those, too? For shame!

And, I don't want ANYONE to be able to reproduce ANY of these recipes. What would be the point of making them yourself?

so ridiculous! i can't believe how mean people can be over the internet. obviously this person doesn't have a clue about what the point of cooking and blogging is in the first place!

I'm also sorry you got the snarky comment. I think of you as a food genius and I just wish I had 1/1000 of your ability to cook and write. Signed "I Make the Fire Alarm Go Off Everytime I Turn on the Oven" (Dianna!)

What a silly comment to begin with. Who cares anyway if a recipe on a blog comes from the blogger's head or from a cookbook on their shelves?

All I care about is a dish, and a person telling me if they liked it or not, why or why not, and possible things they would change. I don't care where the recipe comes from.

I've enjoyed reading your posts; dont listen to the negative nelly's out there. All that is important is that we make good food for our friends and families and enjoy doing it.

Also, I think you have good writing skills; I enjoyed the piece and the observations on Julia Child. You're right that today's cooking shows are a little too neat, clean and perfect.