So...last week, this here blog o' mine was chosen as a finalist for a Riverfront Times web award (along with some of my food-centric friends). Stephanie Tolle (aka Iron Stef), one of my bestest buddies & fellow Food Blog Mafiosa, won the Best Food Blog award. I'm so happy for her; she definitely deserves the honor.

And now, I give you a little story about rice pilaf:

My immediate family wasn't very big...just me, my younger brother, my dad & mom (who passed away 15 years ago). My mom only had a sister & two brothers, the oldest of whom had two sons. I always considered my family to be small.

But, last month I watched a DVD of old home movies that my dad made for me. Most of the silent 8mm videos were of Christmas mornings...my brother & me in our PJ's, with wild bedhead, unwrapping our gifts, surrounded by family members...grandparents, aunts, uncles, cousins. I was surprised to see so many people at our house on Christmas mornings, especially my mom's extended family. There was my great-aunt Anna Mae with her kids. There was my grandfather's brother, too, with his kids and his grandkids. I hadn't realized what a large--and close--extended family I had growing up.

One of the most vivid memories I have of Aunt Anna Mae is of her making rice pilaf for family gatherings. Specifically, I can picture her opening the oven door & pulling out sheet pans full of toasted rice & pasta. I remember not really liking the pilaf then, but a few times in the past several years I've tasted dishes (like Sopa Seca de Fideo) that remind me of the rice pilaf flavor...and I like it now! I think it was the browned butter that was a bit too rich for my young palate.


I haven't seen that side of the family in many, many years. I'd completely lost touch with them until my mom's cousins started popping up on Facebook last year. I asked a couple of Anna Mae's daughters for her rice pilaf recipe. Here's what Parris sent me:

THE REASON YOU DON'T STIR THE RICE IS THAT IT WILL BECOME STUCK TOGETHER INSTEAD OF HAVING INDIVIDUAL GRAINS.

MY ARMENIAN GRANDMOTHER TAUGHT MY MOTHER AND ME HOW TO MAKE THE RICE. WHEN I WAS ABOUT 7 SHE CAUGHT ME LIFTING THE LID AND YELLED "DON'T STIR THE RICE." I UNDERSTAND WHY!!

The first time I made this recipe, I didn't get the taste or texture that I remembered. I wondered if Anna Mae used the oven to make larger batches for family functions & holiday dinners. So, I tried a different method to get those results... 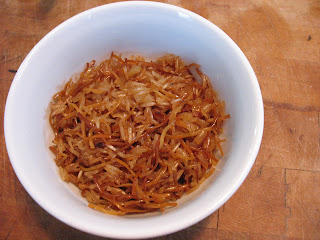 THIS was more like I remembered...a buttery, nutty pilaf...not something to eat everyday, but a treat for special family meals.
at 5:48 PM
Labels: pasta/noodles, rice