I first attempted homemade biscuits in junior high school.  We must have been given an assignment to make biscuits at home, because I remember pulling the hard, dense discs from the oven & my dad teasing me about how horrible they were.

That episode was so scarring that I didn't try to make biscuits again until last January. While those biscuits were crispy & buttery, they were still pretty dense. I wanted something flakier and fluffier.

Last week, I decided to finally try homemade biscuits again. I figured that since I've mastered pie crust and am more confident with doughs in general, biscuits would be no big deal. I was wrong. I rolled out the dough too thin (though, the recipe I was following said to roll it out to 1/4 inch thick), and the biscuits didn't really rise. They were flat and crispy, like biscuit cookies.


A complete failure. I was so embarrassed. Thankfully, my Twitter friends were more than helpful with their biscuit tips & recipe links. On Thursday, I mentioned my biscuit disaster while I was working at Kitchen Conservatory, and Anne showed me how it's done (her recipe is below).

Here's what I learned: 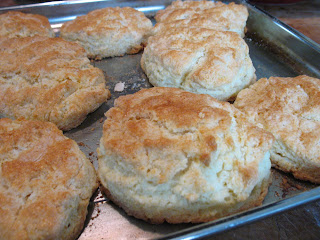 Great tips! I haven't attempted biscuits yet but any breads are kind of scary to me so it might be a while :)

Where do you buy your flour locally? Schnucks has some stuff depending on location but I've never seen White Lily flour around here.

I have yet to master biscuits yet either, although the tip about the glass sealing the edges is quite interesting. I guess I have to pony up for a real biscuit cutter ...

I bought White Lily flour at Schnucks. I live in Alton, IL, so if they have it here, I'd assume they'd have it at some of the Schnucks in S. Louis.