Biscuits are messy to make.

Monday night, I watched the sleet & snow fall and wondered if school would be canceled the next day. By 10:00, there was already a growing list of school closures.
"Do you have stuff to make biscuits in the morning?" Jerad asked.

"Good. We can make biscuits & gravy for breakfast, since you won't have school."

By the time I went to bed, my school still wasn't added to the list of closed schools. At 5:15 the next morning, while every other school in the area was listed, mine still wasn't on there. About 15 minutes later, I got the call.

I answered the phone with a cheery "Good morning!" and promptly went back to bed.

Despite making a huge mess in the kitchen (flour EVERYWHERE!) , these biscuits were easy to make. They were dense, crispy, & buttery and reminded us of pot pie crust...which was actually a nice contrast in texture with the sausage gravy we smothered them in. Next time, though, I'll try a different recipe...one that will yield a softer dough and give me big, fluffy biscuits.
Basic Biscuits
from Homesick Texan 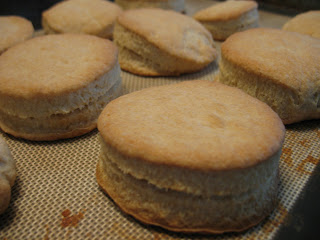 According to Homesick Texan, "beaten biscuits are what people made in the days before baking soda and baking powder was around. In order to get the biscuits to rise, cooks would beat the dough with a mallet, rolling pin or even an axe for over half an hour until it blistered. This injection of air into the dough caused them to lift a bit, but beaten biscuits are still pretty flat, crispy and dense."

We have always used the "Baking Powder Biscuits" recipe from Ye Olde Fannie Farmer cookbook. My mom is famous for them (ask Andy), and they are perfect for smothering with sausage gravy.

I've always made them with a minimum of handling, barely getting the dough to hold together and only kneading 5 or 6 turns...More like scones, I think.
They taste great hot; hockey pucks when cold.
What a great way to spend a snow day!