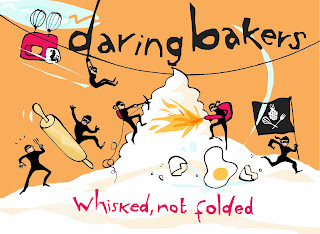 This month's challenge is brought to us by Karen (aka Baking Soda) of Bake My Day! and Zorra (aka Kochtopf) of 1x umruehren bitte. They have chosen Tuiles from The Chocolate Book by Angélique Schmeink and Nougatine and Chocolate Tuiles from Michel Roux's Finest Desserts.

According to the Karen, "traditionally, tuiles are thin, crisp almond cookies that are gently molded over a rolling pin or arched form while they are still warm. Once set, their shape resembles the curved French roofing tiles for which they're named. The Dutch angle: traditionally this batter was used to bake flat round cookies on 31st December, representing the year unfold. On New Year's Day however, the same batter was used but this day they were presented to well-wishers shaped as cigars and filled with whipped cream, symbolizing the New Year that's about to roll on."

We had a choice of making the sweet tuiles or a savory version. I went with the savory version, using a muffin pan to form the warm tuiles into cups & filling them with a mushroom caviar. 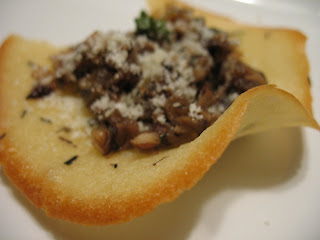 Directions:
In a medium bowl, mix together the flour, sugar and salt. In a separate bowl, whisk the softened butter until it is completely smooth and mayonnaise-like in texture. Using a stiff spatula or spoon, beat the egg whites into the dry ingredients until completely incorporated and smooth. Whisk in the softened butter by thirds, scraping the sides of the bowl as necessary and whisking until the batter is creamy and without any lumps. Transfer the batter to a smaller container, as it will be easier to work with.

Preheat the oven to 400 degrees F.

Make a 4-inch hollow circular stencil. Place Silpat on the counter (it is easier to work on the Silpat before it is put on the sheet pan). Place the stencil in one corner of the sheet and, holding the stencil flat against the Silpat, scoop some of the batter onto the back of an offset spatula and spread it in an even layer over the stencil. Then run the spatula over the entire stencil to remove any excess batter. After baking the first batch of cornets, you will be able to judge the correct thickness. You may need a little more or less batter to adjust the thickness of the cornets. 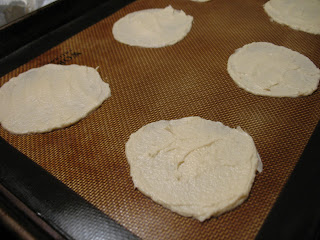 I didn't use a stencil. Instead, I smeared the batter onto the pan with an off-set spatula, trying to make them as round and thin as possible. In hindsight, a stencil would have been easier. I also sprinkled the batter with thyme instead of sesame seeds.
There should not be any holes in the batter. Lift the stencil and repeat the process to make as many rounds as you have molds or to fill the Silpat, leaving about 1 1/2 inches between the cornets. Sprinkle each cornet with a pinch of black sesame seeds.

Place the Silpat on a heavy baking sheet and bake for 4 to 6 minutes, or until the batter is set and you see it rippling from the heat. The cornets may have browned in some areas, but they will not be evenly browned at this point. 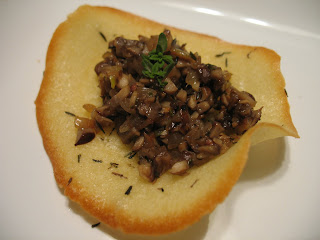 I baked my tuiles initially for about 8 minutes, until they were browned. I then removed them from the oven and immediately transfered them to an upside-down muffin pan that sat on the oven door. I was hoping they would cool into cups. I even put them back into the oven that way to warm a bit, thinking they'd sort of "melt" down around the cups. No such luck. They came out only slightly curved. They still worked as cups, though.
NOTE: Keller's signature French Laundry appetizer is cone-shaped tuiles filled with salmon tartare. To make the cornets, follow the directions below.

Open the oven door and place the baking sheet on the door. This will help keep the cornets warm as you roll them and prevent them from becoming too stiff to roll. Flip a cornet over on the sheet pan, sesame seed side down and place 4-1/2 inch cornet mold at the bottom of the round. If you are right-handed, you will want the pointed end on your left and the open end on your right. The tip of the mold should touch the lower left edge (at about 7 o'clock on a clock face) of the cornet.

When all the cornets are rolled, return them to the oven shelf, close the door, and bake for an additional 3 to 4 minutes to set the seams and color the cornets a golden brown. If the color is uneven, stand the cornets on end for a minute or so more, until the color is even. Remove the cornets from the oven and allow to cool just slightly, 30 seconds or so.

Gently remove the cornets from the molds and cool for several minutes on paper towels. Remove the Silpat from the baking sheet, wipe the excess butter from it, and allow it to cool down before spreading the next batch. Store the cornets for up to 2 days (for maximum flavor) in an airtight container. 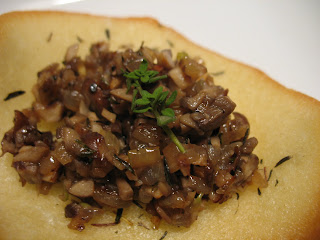 Mushroom "caviar" is simply finely diced shallots & mushrooms sauteed in olive oil & finished with a splash of beef broth & a sprinkling of thyme. I add some grated Parmesan cheese to the finished dish before eating.
at 6:08 AM
Labels: Daring Bakers, snacks, veggies

your mushroom caviar looks appetizing. i regret not going the savory route. i loved that you used thyme!

Your tuile looks great and the mushroom caviar sounds delicious.

Both the tuile and mushroom caviar look delicious! Great job!

yum, that looks so good!

It all looks so appetizing!!! Great job!!!

Mushroom caviar... you did not think too easy! Sounds very good with savory tuiles. And congratulations on completing your January DB challenge!

I love mushrooms and shallots. I will have to try this. Great job on the challenge!