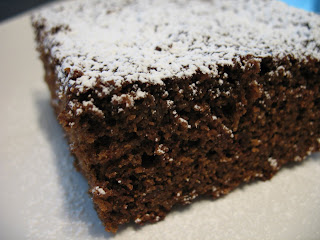 I almost didn't make this week's Tuesdays with Dorie recipe. Heather of Sherry Trifle chose the Chocolate Gingerbread, and while it looked like a delicious dessert, I thought I was still gingered-out from the holidays.

But then, I didn't want to miss this week since I didn't make the last two recipes (Corn & Pepper Muffins and Berry Surprise Cake). I really like being in the TWD group, and I don't want to be kicked out.

You see, I've already been kicked out of one group...not a blogging or baking group, but a group a people I used to be a part of who have quite obviously not included me lately. No more invitations to happy hours or dinners for me. I was hurt as I began noticing my exclusion a couple months ago, and I even apologized for having been cranky over the holidays (they are not really a happy time for me). That didn't seem to matter; I have, apparently, been voted off the island. It's okay, though...really. I've learned to appreciate my true friends even more...the friends who don't dump me because my stress or unhappiness might ruin their good time, the friends who might even go out of their way to cheer me up.

I finally decided to make the gingerbread on Sunday afternoon (it made my house smell yummy!) and took it to school yesterday for my fellow teachers with hopes of brightening a cold, gloomy Monday.

at 9:30 AM
Labels: cakes/cupcakes/muffins, desserts, holidays, Tuesdays with Dorie

This was such a great pick.

This looks great! I chose to opt out this week and as I look at all the great pics and the great reviews I wish I hadn't. Hmmmm... might have to be late with this one and make it tomorrow!!
Fantastic pics!
Tania
Love Big, Bake Often

I love the way yours looks with the dusting of sugar! This did make the house smell great.

I bet everyone at work appreciated the treat! I liked the icing, but it looks great with powdered sugar.

Phooey to that group that kicked you out!

Your gingerbread looks perfectly yummy. I loved this recipe.

Cooking for Comfort by Jennifer said...

Well, that stinks that you were voted off the island! I'm so sorry that happened to you!

No gingerbread cake for them!

I know how it feels to just end up outside of a group without knowing why. Not fun, but hopefully the gingerbread makes up for a little of it. It looks wonderful!

A lot of people seem to have decided to make it almost against their will, but it sure was worth it!

Your gingerbread looks great! Hopefully it tasted as good as it looked!

Looks great with the powdered sugar! Coworkers are a great outlet for baked goods :)

I will not vote you off the island - promise. Your cake looks great.

No Islands here....just lots of hot ovens. Mwah ha ha ha Hope you pay them no never mind. Just start you own madness. I think the next time I make this, powdered sugar will be the finishing element. A little more sugar might be a good thing.
Looks good.
AmyRuth

I'm sorry people suck. But the gingerbread was good.