Jerad gave me a huge, wide, Caribbean blue Le Creuset dutch oven for my birthday in October, and I didn't use it for a couple months. I was saving it for something special...the perfect recipe to break it in.

And then Jerad used it himself...to make a roasted chicken & potato dinner.

It hasn't been in my cabinet since. We've made soups, pastas, and braises. The pot goes from stove to table to fridge to stove to sink and back to the stove for the next meal. I think I've had some kind of food in it since its inaugural recipe. It is, at the moment, my favorite thing to use in the kitchen

Likewise Jerad's mom, Gwen, gave me a copy of Nigel Slater's Appetite for Christmas (She's totally awesome, by the way), and I hadn't yet made anything from it. I was, again, waiting for the perfect time to make the perfect meal. And then I realized that's not what Slater is all about. He's about putting simple but good ingredients together to make delicious meals...meals you can cook and eat any day.

So, when I was thinking about what to make for dinner on Wednesday I remembered that I had some diced prosciutto and a quarter loaf of homemade bread and some parsley...all of the ingredients for a slightly modified version of : 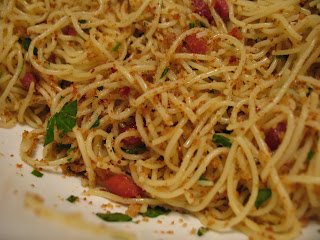 It's not just that this is a cheap supper but that it is put together from things we tend to have knocking around. Its practical, almost puritan background is a bonus. The point is that crisp bacon and bread crumbs work brilliantly with the long strings of pasta. It makes a change to have pasta without sauce. A few glugs of oil at the end are lubricant enough. You can safely use any of the thin pasta family here instead of spaghetti: tagliatelle, tagliarini, fettuccine, or linguine. I have used the wide, floppy ribbons of pappardelle before now. They all work. Try to get a mixture of bread crumb sizes, as they are more interesting to eat.

Whiz the bread to rough crumbs in a food processor, or grate it by hand. It won't hurt at all (in fact it will be a bonus) if some of the crumbs are on the large side. Put a big pot of water on to boil, salt it generously, and shove in the pasta. Let it cook [according to the package directions], till it is tender but chewy.

Meanwhile, melt the butter in a frying pan with a little olive oil to stop it burning. Cut the bacon into short pieces and fry it in the butter till its fat is golden and the kitchen smells wonderful. Scoop the bacon out with a slotted spoon into a large, warm serving bowl. Add a bit more butter and oil to the butter and bacon fat in the pan and tip in the bread crumbs. Stir them from time to time in the sizzling butter till they have turned a rich gold. You need to keep an eye on them because they appear as if they are never going to brown, then suddenly they are almost black.

Drain the pasta and toss it with the hot crumbs and any of their butter, the bacon, and the parsley, plus a little olive oil to moisten and flavor. 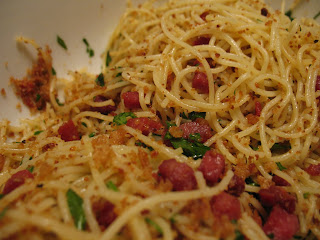 Here are my modifications, based solely on what I had on-hand:

I like to add a few toasted pine nuts or a few cherry tomato's too. This dish is so simple to do...really what ever you have on hand will do. Yours looks Delish!