Warning: This post involves some gratuitous cursing.
Intro: WE MADE MOTHERFUCKING CHARCUTERIE! You have no idea how happy this makes me. I am so smitten with salume & people who have the know-how to make it (see Cute Meat Guys). So, when Jerad decided to make porchetta from a pig’s head, I knew I married the right guy.

Background: A couple Sundays ago, Jerad & I taught a sushi class for couples at Kitchen Conservatory. There was a whole hog class going on in the other kitchen, and since they didn’t use the head Anne asked if we wanted to take it home. Jerad said yes without hesitation. I figured we’d just use the cheeks (the best part on nearly any animal) & ears (blanched, cut, & fried = yum).

Preparation: We hadn’t done anything with that head for a few days, and I told Jerad on Wednesday that he had to make something with it THAT DAY or it was going out with the trash the next morning. I was, quite frankly, a little tired of seeing that thing staring at me every time I opened the refrigerator.


I worked that day and received a text message from Jerad that afternoon with only a photo….this photo: 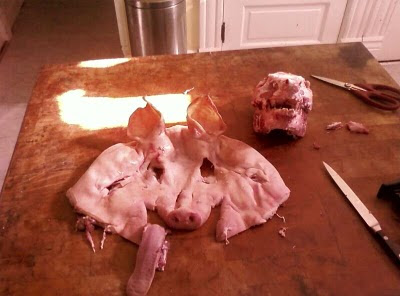 While most people would be grossed out by such a picture, I laughed out loud. I felt giddy. My husband skinned an entire skull, leaving the skin & flesh completely intact. That’s FUCKING HOT in my book. My friend Annie had a different view. She warned, “What is scary is his skill at skinning that skull. You better watch is, sister.“ But, I wasn’t worried; I doubt Porchetta di Kelly is all that tasty.

Jerad did some research online & came across a video of Chef Chris Cosentino skinning a head & talking about how to make porchetta out of it. This was Jerad’s plan. However, Cosentino simply says to cook the porchetta to 190 degrees. He doesn’t specify HOW. Since he said to vacuum seal the meat before cooking, I could only assume he meant to sous-vide it. Herein lie the problem: We don’t have a sous vide machine.

After doing my own research, and after having to buy a vacuum sealer, I decided that my best bet was to use a crockpot & a probe thermometer to cook the meat at a steady temperature. Jeffrey Steingarten suggests using the “serve” setting, but since my crockpot only has LOW & HIGH settings, I was off to buy another kitchen appliance. Luckily, I found a crockpot with a “warm” setting AND an attached probe thermometer. Score! 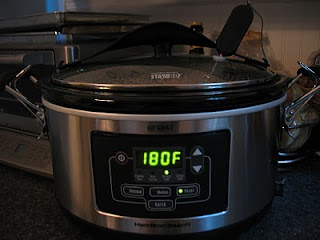 Execution: Jerad seasoned the pig’s face with salt, pepper, rosemary, garlic, & lemon. He wrapped the whole thing (still laid out flat) in plastic & let it marinate in the fridge overnight. The next night we rolled it up, tied it, & vacuum sealed it. I set the crockpot to warm & let it come up to its highest temperature (around 160 degrees). We immersed the meat & let it bathe for 17 hours.  Afterwards, we let the meat sit in the bag in the fridge for a couple days before we cut into it. 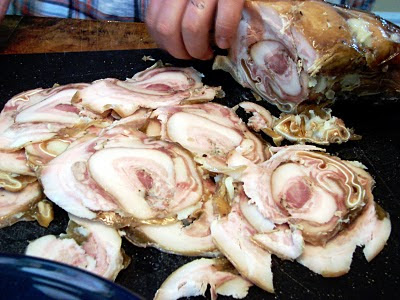 Results: FAN-FUCKING-TASTIC, if I do say so myself. I just can’t believe it actually WORKED! We sliced the meat & served it with grainy Dijon mustard, cherry mustard, pickles, & baguette slices. It is very fatty, thus very rich…but it tasted GOOD. 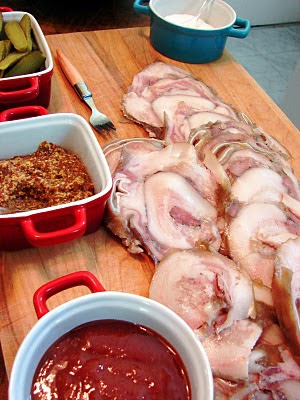 Our initial attempt could’ve used more salt & less lemon, and it could have been tied tighter. Overall, though, I am very impressed with what we ended up with.

Way to go for it.....Porchetta II "The Lengend Lives On" will be even better.....I would have made Hot Head cheese...it's all FUCKING GOOD!

THANKS, by the way, to Stephanie for taking some of the pics for us.

While I am fairly adventurous when it comes to eating, I can't yet handle head cheese...too fucking gelatinous for me. ;-)

Kelly, I'm impressed with your improv! The testa looks absolutely authentic and delicious...

WOWOWOWOWOW is all I can say.

Denise said...
This comment has been removed by a blog administrator.
8:07 PM

I do love me some good pig head. Nice job!