Sherry of What Did You Eat? passed away last Sunday. Since Sherry was a regular participant in Weekend Herb Blogging, the event's founder Kalyn postponed this week's round-up and suggested we make and post recipes from Sher's blog as a tribute to her. (You can see more tributes here.)

Though I'd only recently discovered Sherry's blog, I had already bookmarked a few of her recipes. I chose to make the lentil & spinach patties, a recipe she posted for WHB earlier this month, for lunch yesterday.

Lentil And Spinach Patties
(with just a few small adaptations) 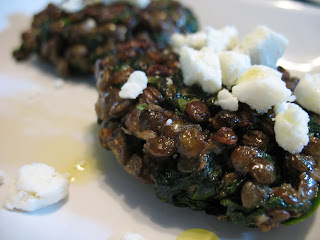 at 9:45 AM
Labels: blogging, grains/legumes, veggies

Astrid (…and the kitties too) said...

I'm really touched by how many people cooked a recipe from Sher's blog. I think she would be very pleased that people honored her like this.

Thanks so much for honoring Sher. That's a lovely recipe.