CORRECTION: The Stable is OPEN! 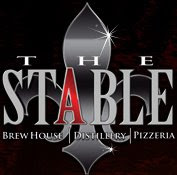 *UPDATE: They are actually open to the public tonight and tomorrow night. Bar opens at 4, kitchen starts at 6. The grand opening is set for Saturday.

I've written before about The Stable, a new microbrewery/distillery/eatzzeria that's opening in south St. Louis. My friends Sara & Jesse are the owners. This bar is getting LOTS of press around here. In fact, there was a blurb about them in The St. Louis Business Journal yesterday, they were discussed on Fox Channel 2 this morning, and were mentioned on NPR as well.

Why all the hype about a bar opening?
Besides producing two of its own microbrews on site, The Stable will be serving a selection of hard to find beers on tap and in bottles. No Bud Light or Miller Lite here! This place is for serious beer drinkers. You can see the current beer list on STLHops.
The Stable will also brew Lemp's Cherokee Lager, a Vienna-style red lager, under contract with Steve DeBellis, owner of the Lemp Brewing Co. name and trademark. This will mark the first time Lemp has been brewed in St. Louis since the end of Prohibition. Plus, The Stable is the St. Louis area's first microdistillery; they will be crafting small batches of spirits including rum, vodka, absinthe, and moonshine.
And, the food is excellent. I've had a chance to sample some of the appetizers and pizzas. They will also offer a house salad, grinder sandwiches, entrees (apparently, the steak and truffled mashed potatoes are tasty), and daily specials. I have my eye on the Thursday special: Osso Bucco with macaroni & cheese. (I'll write more about the food this weekend, as I'm having dinner there on Saturday.)
The Stable is located at the corner of Lemp & Cherokee. Join us on Saturday evening for the Grand Opening!

Can't wait to get over there. I've been more into beer lately than wine, for some reason. It feels more nutritious! And it's every bit as complex.