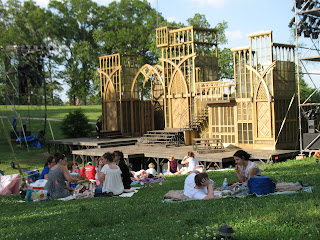 I made a gargantuan sandwich to take to Shakespeare in the Park on Thursday. It was the perfect night, breezy and cool, to sit outside and watch a spectacular production of The Tragedy of Richard the Third...and enjoy a feast.

This recipe was inspired by one I saw on Martha Stewart's website. I didn't add a dressing, as she suggests, because I didn't want the sandwich to get soggy. Besides, the jarred olive tapanade was moist enough.

And, the leftovers were still okay two days later!

Here's what I did:

I used a rustic Tuscan loaf from Whole Foods, sliced in half horizontally.

I spread goat cheese on the top half, then topped it a combo of mortadella, capicola, and salami. I actually meant to put this on the bottom half, but it worked just fine this way.

I spread the other half with black olive tapanade.

Then, topped it with baby arugula.

And a roasted red pepper.

I wrapped the sandwich tightly and put a heavy cast-iron skillet on top. I let that sit until I was ready to go!

The sandwich was very tasty...and the bread held up well. I will definitely make this again!
at 10:23 AM
Labels: sandwiches

What a great melding of flavors and textures.

I too think the Picnic sandwich is the perfect item to be toted to an outdoor event. With its size, I'm always able to feed my guests and then share it and make new friends just by handing the extra pieces out to those who see it unwrapped and tell their friends; "look at that sandwich!!!" There's always enough!

Thanks for making it available during my search.