A recent conversation I had:

Them: "Foodies are just thirty- and forty-somethings who used to shop at The Gap."

"I mean, they cook and eat the things that are fashionable at the time to be considered trend-setting and cool...like people who shopped at The Gap in the 80's & 90's."

"So, what foods do you consider trend-setting?"

"Right now, it's old-fashioned--I mean, retro--foods that foodies are bringing back and modernizing...like macaroni & cheese made with goat cheese or curried egg salad or creamed turnips."

"Hey, now! I'm not making turnips because they trendy-retro. I'm making them because someone just gave me an entire bag of fresh turnips!" 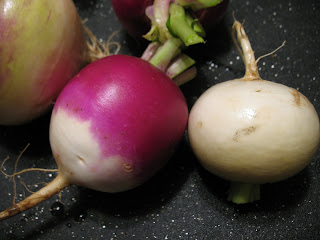 I wouldn't consider turnips to be a trendy food, but I am noticing that turnip recipes are appeared on several blogs lately. My guess is that's because turnips are currently in season, not necessarily in fashion, at the moment.

Turnips were another food I'd never cooked or eaten. So, I chose to make Alanna's creamed turnips to go with roasted chicken earlier this week.

I think turnips have gotten a bad rap in past. Uncooked, they have a strong, peppery aroma. Cooked, they taste slightly sweet...though, I can see how they could be bitter if prepared incorrectly.

I thought this was a good alternative to mashed potatoes, and now I'd definitely try other turnip recipes.

My husband does the low-carb thing, and this sounds like a wonderful alternative to potatoes. We already use turnips in place of potatoes in soups and stews - delish!

Made a Shepherd's Pie the other night, substituting the potatoes on top with cauliflower puree - it was AWESOME. SO much lighter than a "normal" Shepherd's Pie. And, an extra serving of veggies devoured by my toddler...

I'm not sure how trendy turnips are but I've been a big fan of them for many years and I've never bought anything at the Gap.

Well, ok. First of all, there are foodies and then there are food snobs. Just like you can LOVE red wine, and then you can start calling yourself a vin conossieur. There's a big diff, and it doesn't involve anything khaki.

Second, how WAS this recipe? I keep wanting to try cooking with turnips, but I chicken out.

I really like the turnips. They weren't what I expected at all!

I think they would be good diced and roasted as well!