In my quest to find tasty recipes for wild duck, I experimented to find out the best way to sear duck breast.

Preparing the meat is a crucial step to eliminate the gamey taste and to tenderize the meat. I soaked fresh boneless & skinless breasts--And I mean fresh, those duckies were breasted out on my front porch!--in salted water overnight. Then, I soaked them in whole milk over another night.

After a rinse, the breasts were dried, sliced thin against the grain, generously seasoned with salt & pepper, dredged in flour, then quickly seared in a touch of olive oil.

At first, I tried chopping the meat coarsely, seasoning, & searing. The insides of the little meat cubes were pretty rare. While the meat was tender and the flavor was good, it was still a bit too raw for me. That's when I tried cutting the meat into thin slices instead. I liked the flavor and texture of the dredged pieces rather than the "naked" ones. 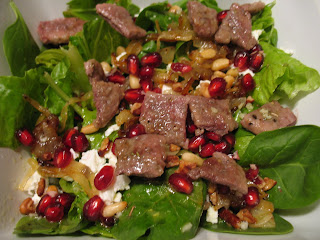 And it was really good! I'll put this one down as a "do again" recipe!
at 8:43 PM
Labels: duck/dove/pigeon, salad