Ok, so, this is day 9 of NaBloPoMo. I've been pretty proud of myself for posting every day so far, without much fluffy filler. While I have a lot of recipes waiting in the wings to get posted, I am running out of witty banter. Instead of telling an enlightening story, let me catch you up on what's been going on around here.

First of all, I can't seem to figure out why the bold feature won't undo itself on the text in this post (or why some of the text is bigger than the rest). I've tried selecting all the text and pushing the "b" button & resizing the text, but it doesn't work. So, this post is in bold. With some bigger letters. Deal with it.

For those of you who've been asking, there are NO wedding plans yet. We've talked about a couple possibilities, and even though I want to do something simple, we are running into a few snags (mainly WHEN to get married). I thought I had the perfect plan: Spring break, Vegas ceremony early in the week, pig roast reception later in the week. But that's probably a little too soon for our budget and a Vegas wedding/outdoor reception in the summer doesn't seem like such a good idea. So, we're still working on it.

There is just over a week of school left before winter break. I still have a ton of papers to grade between now and then, but I've really been trying to not bring so much work home this year. All in all, I've had a fairly good year and am excited about some of the things going on in my classroom.

I STILL haven't done any holiday decorating or shopping. I doubt we'll get a tree this year, since Jerad isn't done refinishing the floors yet. I suggested we not buy gifts for each other, since he just bought a ring and we should start saving for the wedding, but I don't think he's going to stick to that. So, I'll be shopping for gifts at the last minute like I always do.

Today, I simply don't have a story to tell about quinoa or making this recipe...other than that the way I got Jerad to eat it for dinner was to remind him that there was BACON in it & that the quinoa was toasted IN BACON FAT.

Oh, and, I've made quinoa before. If you're not sure what quinoa is, or even how to pronounce it, read that post. 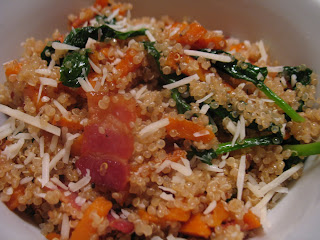 adapted from Serious Eats
According to Serious Eats: "Full of fiber and antioxidants, this is one-bowl meal you can feel virtuous about eating. The bacon contributes smoky flavor and a nice textural contrast, but you could leave it out if you wanted to make this a vegetarian dish. (In that case, skip the bacon step and instead sauté the onions in 1 tablespoon of olive oil.)"

My notes: First of all, when a recipe calls for 2-4 slices of bacon, I'm going to go with 4...because when it comes to bacon, more is always better. Right? Right. This, however, meant that I had too much bacon fat left in the pan. So, I drained some out until there was just a thin layer left in which to toast the quinoa. 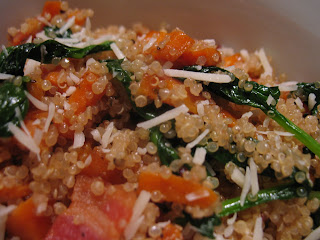