A couple weeks ago, my friend Stephanie (aka Iron Stef) helped me make David Chang's roasted pork belly & Chinese steamed buns. The recipe comes from his new cookbook Momofuku, named after his acclaimed New York noodle bar (which was named after the guy who invented instant ramen). 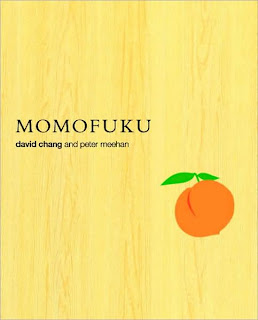 Chang's book received attention when it was released in October not only because of the recipes and gorgeous color photos but also because of his narrative voice. In the introduction to each section, Chang "relays with candor the tale of his unwitting rise to superstardom, which, though wracked with mishaps, happened at light speed." And he curses. A lot.

On Oct. 27, the day Momofuku was published, Ian Froeb made some interesting observations in his Twitter updates (Ian is the food critic for The Riverfront Times & editor of their "Gut Check" blog):

# of paragraphs in Momofuku cookbook before first f-bomb? 7.5

# of paragraphs in Momofuku cookbook before questionable use of phrase "golden shower"? 3.5

in other words, having read only the intro, ready to declare Momofuku cookbook of the year. certainly the most entertaining.
The book does make for a good read. In fact, I read it cover-to-cover like a novel. Even the recipes themselves are entertaining reading. For example, in his steamed buns recipe he writes: "Cover the armada of little dough balls with a draping of plastic wrap and allow them to rest and rise for 30 minutes." Good stuff.

Warning: This cookbook is written for serious cooks. Chang even admits that some recipes aren't meant for home cooks. Other recipes, like his infamous pork belly buns, are fairly easy; they just require many time-consuming steps. But in the case of the pork belly buns, the time is totally worth it. 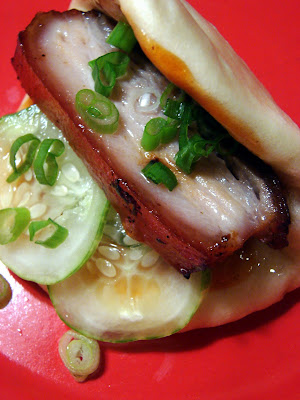 Okay, ﬁfty buns is a lot of buns. But the buns keep in the freezer for months and
months without losing any quality, and if you cut the recipe down any more than this,
there’s barely enough stuff in the bowl of the mixer for the dough hook to pick up. So
clear out a couple of hours and some space in the freezer and get to work.
1 tablespoon plus 1 teaspoon active dry yeast
11⁄2 cups water, at room temperature
41⁄4 cups bread ﬂour
6 tablespoons sugar
3 tablespoons nonfat dry milk powder
1 tablespoon kosher salt
Rounded 1⁄2 teaspoon baking powder
1/2 teaspoon baking soda
1 ⁄3 cup rendered pork fat or vegetable shortening, at room temperature 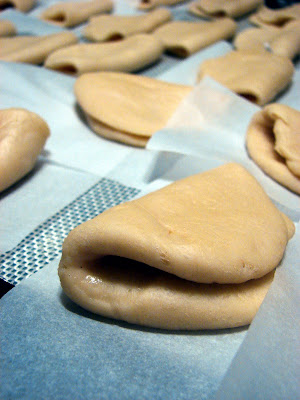 2 meaty Kirby cucumbers, cut into 1⁄8-inch-thick disks.
1 tablespoon sugar
1 teaspoon kosher salt
TO ASSEMBLE THE BUNS: Slather each bun with hoisin sauce. Then place a slice of pork belly, a couple pickles, & a sprinkling of sliced scallions inside the buns. Eat & be amazed that you made such a tasty dish. The next morning, take some buns from the freezer, steam them for just a couple minutes to reheat, then stuff each with scallion scrambled eggs & leftover pork belly that you've reheated in a skillet. Dress with hoisin sauce (or hot sauce if you're feeling frisky) for a breakfast of champions.
Thanks to Steph for taking the photos!

Wow, I'm a little jealous - I can't wait to make and taste!

Where did you get the pork belly? Hmm, I should check the freezer, we supposedly got a 'whole hog', it might be in there! (Or maybe in the sausage that disappeared first.)

Yeah, I will definitely have to try this! :)

I got the pork belly at Global Foods.