I was recently accused of being a Francophile. Ok, I'll admit to being slightly obsessed with French culture. Sure, I long to travel to Paris, to eat cheeses & baguettes in an outdoor cafe while sipping champagne. Is that so wrong?

My accuser is Italian, so I can understand how he'd object to my "distinctly Francophilic leanings." Little does he know, I cook pasta more than anything at home. In fact, I've posted way more authentic Italian recipes than French ones...like carbonara, risotto, bolognese, ravioli, minestrone, and panzanella.

Last night, I tried a pasta recipe from Gourmet Today. I received a copy of this massive new cookbook at a luncheon with Ruth Reichl, editor-in-chief of the recently defunct Gourmet magazine. She came to St. Louis to promote the book, a visit that was originally postponed because of Gourmet's sudden demise. 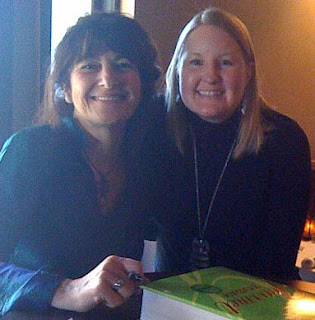 Me with Ruth Reichl

Lunch was a multiple course meal prepared by St. Louis's best chefs, including Josh Galliano of Monarch, Gerard Craft of Niche, Kevin Nashan of Sidney Street Cafe, & Michael Roberts of Atlas. (Francophilic sidenote: I finally tried the cassoulet at Atlas. It's as good as people say it is!)

Before we ate, Ruth declared that Gourmet Today may be the "last cookbook of its kind." She explained that the twelve chefs in the magazine's testing kitchens would make a recipe five or six times before perfecting it. Even the simpliest recipes--which she says are the most difficult to perfect--were tested numerous times. She specificially mentioned the spaghetti with pecorino Romano & black pepper recipe with its list of only three ingredients.

According to the cookbook, cacio e pepe is a classic Roman dish that "is so sublimely simple that initially we wondered if you would even need a recipe to make it. As it turns out, perfecting it was challenging, but ultimately we found the ideal combination of spaghetti, melting pecorino Romano, and crushed black pepper." 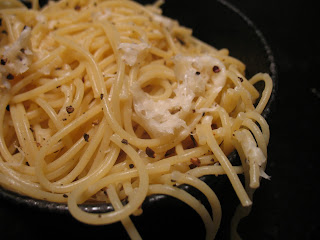 For this recipe, you need to grate the cheese with the ragged-edged holes of a box grater for ease of melting. Don't use the small teardrop-shaped holes or a rasp (Microplane), as your cheese will clump up in the bowl.
2 teaspoons black peppercorns
1/2 pound spaghetti
2 1/2 ounces grated Pecorino Romano (3/4 cup plus 2 tablespoons)

Kelly, I love the new look of your blog. Perhaps I can take you for a glass of vino over the holidays to pick your brain about food blogging since I just started mine a month ago.

Denise (from the Ruth lunch!)