A Gumbo Recipe In Memoriam 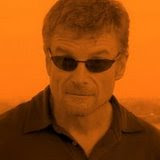 Ernest "Eric" James Martin
Yesterday would have been my Uncle Eric's 47th birthday. Sadly, Eric took his own life on September 27, 2008. He had lost his home to flooding in New Orleans after hurricane Katrina, and he just never recovered...financial or emotionally.
Eric was only about 12 years older than me, so we were kind of close when we were younger. I have lots of memories of playing together at my grandparents' house and on family vacations. 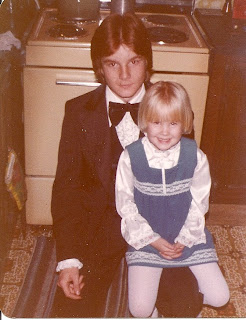 Eric and me before either his graduation or senior prom (?)
Uncle Eric was one of the most creative people I've ever known. He lived all over the country (Illinois, Florida, Los Angeles, West Virginia, New Orleans) and held a variety of interesting jobs...tee-shirt designer & screen-printer, restaurant owner & chef, landscaper. He was once an extra in a Jermaine Jackson video, which was shot in the L.A. restaurant where he waited tables (he walks by in the background at the 2-minute mark). He once drove Ziggy Marley in a limo to the MTV awards. He once gave me a huge, plastic goose lamp for Christmas and designer-label dresses for my birthday. He once corned a beef brisket, and he made the best curried chicken salad with grapes & almonds. He was once on an episode of Hollywood Squares. He had an intoxicating laugh. He had, apparently, met Vincent Price in the mid-80's. 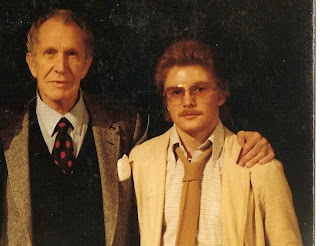 In the few years before Katrina, I visited Eric in New Orleans a couple times. We always had too much fun hanging out. In fact, we sometimes got pretty wild dancing at the gay bars in the French Quarter or bar-hopping in the Alton area when he came back to Illinois.

After the hurricane, Eric was determined to rebuild his house. He was downright stubborn about it, always returning to New Orleans despite getting help, employment & housing from friends in San Francisco, in West Virgina, in Florida. For whatever reason, Eric just couldn't recover after losing his home, his job, his relationship, and--for the most part--his sanity. 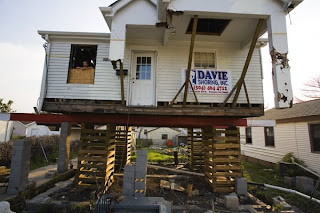 photo of Eric's post-Katrina house that was featured in National Geographic
I can't say the news of his death came as much of a shock to me (although, Uncle David did call on the night before my birthday, and I initially thought he was calling with birthday wishes). I think I'd been expecting the call. I was devastated nevertheless...especially since my aunt Nancy, Eric's sister, had asked if he could come stay with me a year or so earlier. I said no because I was dealing with my own loss at the time (loss of my marriage, my friends, my lifestyle), and I didn't think I could provide a stable enough environment for him (I was working 3 jobs and was never home). Yet, I felt guilty for not helping him then.

While I am not typically a spiritual person, I'd like to think Eric is in a better place...that he's finally happy and content, and no longer struggling with whatever demons haunted him.
Anyway, the first time I went to see Eric in New Orleans, he greeted me and my friend Sue with a home-cooked gumbo dinner. So, in honor of Eric, I made gumbo for dinner last night.
Gumbo
adapted from Epicurious

* I used a pre-mixed Cajun seasoning that contained many of the same ingredients.

1. Make a roux by melting the butter in a large stockpot or dutch oven over medium heat. Whisk in the flour and cook until foaming. The mixture shouldn't clump up, but should look like a thick liquid. Add a glug or two of olive oil if it's not thin enough. Cook, stirring often, until dark mahogany, about 1/2 hour. 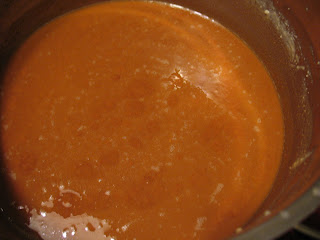 Don't be afraid to get your roux even darker than this!

3. Add the andouille, chicken, & shrimp and cook for approximately 15 minutes or just until the shrimp are cooked. Taste and adjust for seasoning. Serve over steamed rice. 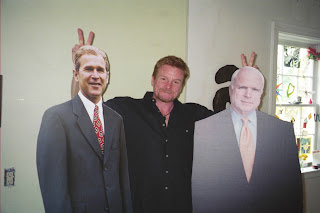 Rest in peace, Uncle E. I miss you.

Wow, I'm so sorry for your loss. I did disaster relief in Louisiana right after Katrina and saw how devastating it was on people's hope. I have lost loved ones to suicide and know the wide range of emotions it brings. I hope you have loving safe people to talk to about it.

I'm so sorry and as a fellow suicide survivor, I completely understand the hole left when someone leaves us this way. My partner in life Wren, took his life the day after you uncle died. I blogged about it that very night and didn't think I'd ever recover. We all hope they are in a better place and know how much they were loved on this earth and still are.

The gumbo is wonderful tribute to your uncle.

Very nice tribute. How very sad and tragic, so very sorry to read about it.