Tuesdays (or Wednesdays) with Dorie: Devil's Food White Out Cake

The past week has been a stressful one for me. I've been sick (and I am not a good sick person), Jerad's been working really late many nights, and work's been particularly trying. But, on the advice of a wise person...I have a new attitude toward it all. From now on, home will be my drama-free zone. I'm going to grade papers and complete lesson plans each day at work so that I don't have to bring home huge stacks and do hours upon hours of research, reading, and worksheet-making like I did this past weekend.

So, tonight, I came home sans school-work and did one of the most therapeutic things I found lately...I baked a cake.

For this week's Tuesdays with Dorie recipe, Stephanie of Confessions of a City Eater chose Devil's Food White Out Cake, the cake pictured on the cover of Dorie Greenspan's Baking From My Home to Yours. 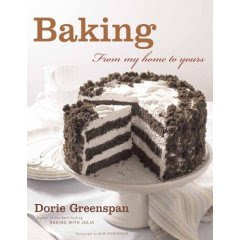 This triple-layer chocolate cake is frosted with a marshmallow icing then coated with cake crumbs.

I made a couple slight modifications, using only two layers and sprinkling the finished cake with crushed Oreo cookies...because, come on...isn't that what the cake above reminds you of? 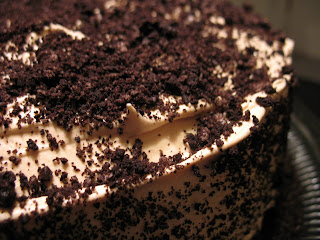 The fluffy icing was much easier to make the stove-top version I tried in for the chocolate peppermint cake in December. This is made by beating egg whites in a stand mixer then drizzling in a boiling simple syrup mixture. Easy...and so yummy!

I did have one snafu, however. Even though I removed the syrup as soon as it hit 235 degrees, it had already started to caramelize. So, my frosting was tan color (with a caramel flavor) instead of bright white. Oh, and I thought a full tablespoon of vanilla was too much...it made the frosting taste a little boozy when eaten straight. Though, that's not really a bad thing!

In the end, while this wasn't the prettiest cake I made it was a damned tasty one! 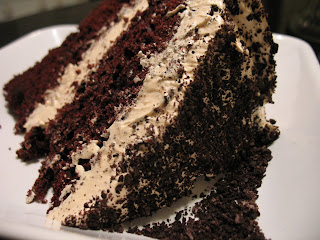 Speaking of cakes...here's the cake I made for one of my classes after we'd read Jonathan Swift's "A Modest Proposal." On, and, it was a red velvet cake! I'm so bad. 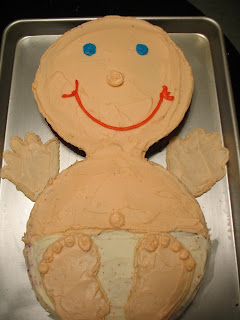 I totally want to make this. I just can't do it until I have clean dishes in my house.

That cake is so freakin adorable!! I love it! And.. I guess we are both on the same page this week with using Oreos. http://www.cupcakeproject.com/2009/02/oreo-cookies-made-from-scratch-just.html

That cake is perfect for Swift's story. You ARE bad, tho. HeeHee

Oreos! Yum!! But even better is the Jonathan Swift cake -- now I'm going to have to make my sons read that so I have an excuse to give them a baby cake!

Thanks for accepting my friend request! Baking cakes is very calming. The baby cake is just precious!

This cake looks so delicious. You did a lovely job on the pics too.