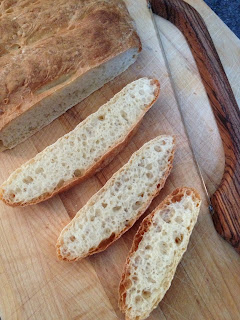 I recently came across a post by Zoe & Jeff, authors of Artisan Bread in Five Minutes a Day, featuring bread baked in a crock pot. "Genius," I thought. "No heating up the house to bake bread during the summer!"

Their basic white bread recipe makes four pounds of dough, enough for four loaves of bread. It's a simple technique: Simply mix the dough by hand and let it sit for 2 hours. At that time you can either bake a loaf or refrigerate the dough for a couple weeks, taking a pound out each time you want to bake some bread. It's stupid easy.

I halved their recipe, using the dough right away. I put one loaf straight into the crockpot & let the other rise for 90 minutes before going into the oven.


Sadly, the crockpot loaf was a total bust. It never baked firmly; the inside was still too dough & mushy even after an extended baking time. I tried to brown the loaf under the broiler, as suggested, but it was still not good. And, it was ugly.


The oven-baked version, however, was damn near perfect. After the initial 2 hour rise, I formed the dough into a round loaf by quickly tucking the dough under itself then let it sit on the counter for 90 minutes.


My one mistake was trying to slash the top of the risen dough; it only deflated my loaf. Still, the bread--albeit a bit thin--came out crusty & airy. Success! 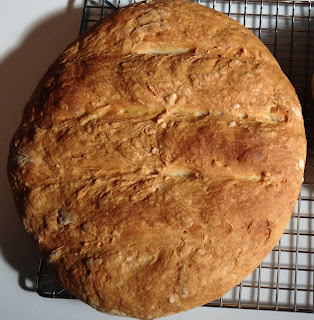