I love Halloween. I mean, I LOVE it. When I was married, my husband and I had huge "tarts & vicars" parties for Halloween. We'd go all out for our costumes. Over the years, I went as a Hooters girl (with an official uniform), a Moulin Rouge dancer (with a custom made skirt that had layers of ruffles underneath), Dr. Frank N. Furter from the Rocky Horror Picture Show (I put together an outfit that looked identical to his in the movie), Princess Leia in the slave bikini, and Eve (as in "Adam and").
Our parties got so wild that they partially caused two divorces (including ours). So, I laid off on the Halloween parties for a few years. Last year, I went to an 80's prom party; my costume included a horrifically awesome dress complete with peach lame, black velvet, black lace, AND black beading, a banana clip, & a big neck hickey. Costumes are all about the accessories.

When I was invited to a dead celebrities party this year, I couldn't pass it up. Coming up with a creative costume was a bit more difficult than I expected. I figured there would be a ton of Michael Jacksons & Farrah Fawcetts (though, there were NONE of those!). I considered going as Sylvia Plath (but I'd have to buy an Easy-Bake Oven) or Jon Benet Ramsey. I finally decided to go as Joan Vollmer, the wife of William S. Burroughs. My costume consisted of a flowered 50's-ish dress, apple, and gunshot wound. 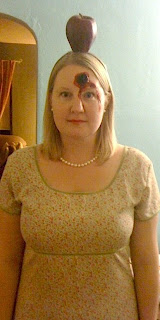 Here's the story: William S. Burroughs (famous author during the "beat" movement, he wrote Naked Lunch) & his wife Joan fled to Mexico in the early 50's to avoid drug charges in the U.S. At a party one night, while drunk and most likely drugged out (he was a morphine addict), William tried to shoot a glass (though, the story has since evolved into his using an apple) off of his wife's head to prove what a good shot he was. He missed. To avoid murder charges, he had to flee back to the U.S.

Of course, very few people at the party knew who I was. But, that was ok with me...I like obscure literary references. My favorite costumes at the party were Helen Keller (she wore two different shoes, a nice touch!) and Fred Sanford & his wife (they played the Sanford & Son theme song when they came in. I love costumes that come with soundtracks!).

Anyway, I also celebrated Halloween on Friday night by teaching a Girls' Night Out "zombies & 'wiches" class at Kitchen Conservatory. This was my favorite recipe of the night...we served it on a sandwich with grilled salmon.

1. Heat a heavy large pot over medium heat. Add chile pieces; toast until aromatic and lighter in color around edges, pressing with potato masher or back of fork and turning pieces, about 2 minutes. Transfer pieces to medium bowl & cover with hot water; soak until soft, about 30 minutes.

3. Add bread slice to pot; cook until golden, about 30 seconds per side. Transfer bread to processor (reserve pot). Add tomatoes to processor. Puree mixture until smooth. Transfer tomato puree to small bowl (do not clean processor).