I learned a valuable lesson last night: Cooking French food is a HUGE pain in the ass, but it's worth it! 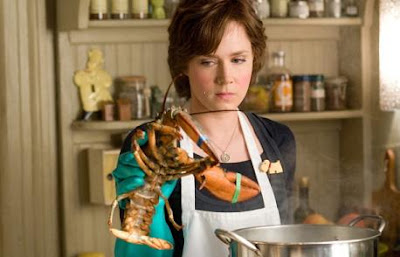 Steaming live lobsters is actually much less traumatic in real life.
Ok, so, there are A LOT of steps to making lobster Thermidor...which is basically just lobster meat mixed into a cream sauce with mushrooms, then topped with cheese & baked. Here's a general break-down of the steps:
Half way through all this straining, mixing, & reducing I thought to myself, "There's got to be an easier way! I could have just made a mushroom cream sauce to mix with the lobster. This is RIDICULOUS!" I think Jerad felt the same way; he was getting a tad frustrated after I'd dirtied nearly every pan in the house and gotten lobster juice all over the counter.

An hour and a half later, as I was eating the creamy & richly-sauce lobster, I had an epiphany. THIS is why people are so smitten with French food! I finally understood that all those steps--all the straining, mixing, & reducing--is necessary to create all those LAYERS OF FLAVORS. A simple cream sauce wouldn't have tasted like that. No way. Even Jerad is now a French food convert. 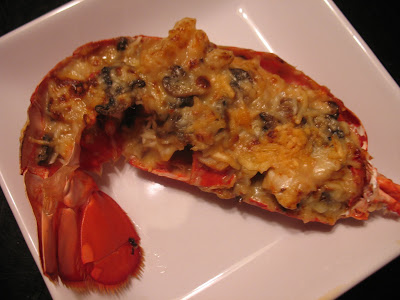 So many steps are involved in the preparation of a really splendid lobster Thermidor, no wonder it costs a fortune in any restaurant! But it is not a particularly difficult dish to execute, and everything may be prepared in advance and heated up just before serving. This is an especially attractive recipe for lobster Thermidor because the meat is stirred in hot butter before it is sauced, and turns a rosy red. Buy lobsters weighing a good 2 pounds each, so the shells will be large enough to hold the filling.

A Note on Dealing with Live Lobsters: If you object to steaming or splitting a live lobster, it may be killed almost instantly just before cooking if you plunge the point of a knife into the head between the eyes, or sever the spinal cord by making a small incision in the back of the shell at the juncture of the chest and the tail.
Serves 6

Steaming the lobsters: Simmer wine, water, vegetables, herbs, and seasonings in the kettle for 15 minutes. Then bring to a rolling boil and add the live lobsters. Cover and boil for about 20 minutes. The lobsters are done when they are bright red and the long head-feelers can be pulled from the sockets fairly easily.

While the lobsters are steaming, stew the mushrooms slowly in the covered saucepan with the butter, lemon juice, and salt for 10 minutes.

The sauce: When the lobsters are done, remove them from the kettle. Pour the mushroom cooking juices into the lobster steaming juices in the kettle and boil down rapidly until liquid has reduced to about 2 1/4 cups. Strain into the 4-cup enameled or stainless steel saucepan and bring to the simmer.

Cook the butter and flour slowly together in the 1 1/2-quart saucepan for 2 minutes without browning. Off heat, beat in the simmering lobster-cooking liquid. Boil, stirring, for 1 minute. Set aside. Film top of sauce with the cream.

Split the lobsters in half lengthwise, keeping the shell halves intact. Discard sand sacks in the heads, and the intestinal tubes. Rub lobster coral and green matter through a fine sieve into the mixing bowl, and blend into it the mustard, egg yolks, cream, and pepper. Beat the sauce into this mixture by driblets.

Return the sauce to the pan, and stirring with a wooden spoon, bring it to the boil and boil slowly for 2 minutes. Thin out with tablespoons of cream. Sauce should be thick enough to coat a spoon fairly heavily. Taste carefully for seasoning. Set aside, top filmed with a spoonful of cream.

Sautéing the lobster meat: Remove the meat from the lobster tails and claws, and cut it into 3/8-inch cubes. Set the skillet with the butter over moderate heat. When the butter foam begins to subside, stir in the lobster meat and sauté, stirring slowly, for about 5 minutes until the meat has turned a rosy color. Pour in the cognac ("Off the heat!" says Kelly. "You don't want to set your kitchen on fire!") and boil for a minute or two, shaking the skillet, until the liquid has reduced by half.

Final assembly: Preheat oven to 425 degrees. Fold the cooked mushrooms and two thirds of the sauce into the skillet with the lobster meat. Arrange the split lobster shells in the roasting pan. Heap the lobster mixture into the shells; cover with the remaining sauce. Sprinkle with cheese and dot with butter. The recipe may be prepared ahead up to this point and refrigerated.

Place in upper third of 425-degree oven for 10 to 15 minutes, until lobster is bubbling and the top of the sauce is nicely browned. Serve immediately on a platter or serving plates.

Wow! You are a brave gal. Prior to kids I might have attempted this. I can imagine that it is so worth the effort.