As a blogger, I often get emails asking me to sample products or inviting me to restaurants for dinner. The implication of such offers is, of course, that I'll write something nice about it on my blog. While I have accepted a few free products to try (like Amano chocolate, Fig 'n Ginger Chutney, & Country Bob's sauce) and given away a couple free cookbooks, most of the time I turn down these invitations.
This summer, a fellow food blogger asked me what I wanted to "get out of blogging." I was confused by the question. I don't want to get anything. While some people nearly make a living out of pimping other people's products, that's not what I want my blog to be all about. Sure, I like free dinners, but I am simply not going to sing the praises of any chain restaurants or big corporate breweries.

However, when I received an invitation to attend a wine dinner with Mirassou Winery at Mia Rosa, a local Italian bistro, I jumped at it. Here was a chance for me to not only score a free dinner but to also give props to a local chef and a family-owned winery.

Mirassou Winery is owned by the country’s oldest winemaking family; they recently celebrated their 155th anniversary. To celebrate, David Mirassou (6th generation) visited six cities in the country where he hosted wine dinners for bloggers and media folks. As part of the tour, he also unveiled an online cookbook--Taste & Toast--featuring recipes from the restaurants that housed the wine dinners.

David told us an interesting story about the start of his family’s winery. In 1854, Pierre & Henrietta sailed to California from France with their prized grapevine cuttings. They were reprimanded by the ship’s captain for using too much water to keep the plants alive, so Pierre purchased all of the potatoes onboard and inserted the cuttings into pieces to keep them alive.

The wine dinner was held at Mia Rosa (4501 Manchester). The rustic Italian restaurant is manned by chef-owner Philip Noe (who also teaches cooking classes at Kitchen Conservatory). Chef Noe took time to prepare dishes that actually paired with the wines.

Our menu for the night consisted of six-courses with seven wines:

Zeppole with Chocolate Sauce
2007 Riesling
The food was absolutely amazing and paired quite nicely with the wines. My favorite dish of the night was the smoked scallops..so tender & flavorful. Another favorite was the polenta fries. I could have eaten those all night! All in all, I was very happy with the food. I look forward to going back to Mia Rosa for dinner sometime soon.

As for the wines, I started out the night taking detailed tasting notes but after a few glasses (ok, SEVERAL glasses), I either neglected to write stuff down or my handwriting was too ineligible. Here’s what I do remember...

The sauvignon blanc was smoother and more “buttery” than the pinot grigio.

The chardonnay had a “cleaner” mouth feel than a typical chard, mainly from being partially fermented in stainless steel.

Then I wrote something that looks like a pound sign next to the word “merlot.” At least, I THINK that says merlot. 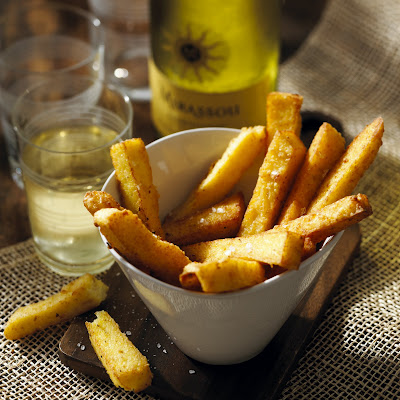 I know diddly about wines but I know fries!!!! I want some of those polenta fries now!!!! They look so delicious