Remember the name-dropping I did last week? Well, here's some more...
My friend Stephanie bought us two seats to Rick Bayless's cooking demonstration & book signing in St. Louis (which took place yesterday) for my birthday.  While it was only an hour-long demo, I learned a lot from the American authority on Mexican cooking. 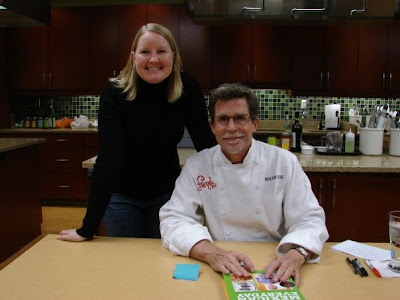 Confession: Rick Bayless reminds me of Kermit the Frog.
In a good way.
That's a compliment.
First, let me say how much I like Chef Bayless. This is the third time I've met him (brag!).  The first was at his Chicago restaurant Topolobampo several years ago. As I was having dinner there (I remember, by the way, that the raw oysters were the BEST I've ever had. In Chicago even!), Chef Bayless walked through the dining room. I was shocked to see him. At the time, I'd never seen "celebrity" chefs actually IN their restaurants. When I asked our server about it, she informed me that he's there every day because...HE WORKS THERE.  At the end of our meal, Chef came to our table to ask if everything was ok. He was gracious enough to sign a menu for me, too.
I saw him again just this past summer at the BlogHer conference. He is one of the nicest, most sincere people I've met. He seems genuinely interested in teaching people about Mexican cuisine. He even routinely answers questions about cooking on his Twitter profile!
At this cooking demo, Bayless made two tomatillo salsas (recipes below) & used them in a few other recipes (guacamole, chicken tostaditas, & shrimp in chipotle cream).  Here are some highlights from the notes I took:
One of my favorite parts of his talk was when he told us about being on Top Chef Masters. He said it was pretty hard! The chefs did NOT know what to expect from each challenge. He said there is little you don't see on screen when it comes to the challenges, as in there are no behind-the-scenes tricks. They even had to wash their own pots & pans DURING the challenges! He also said they did all the cooking themselves for each challenge, no sous-chefs! In fact, they weren't even allowed to help each other on some of the elimination challenges. 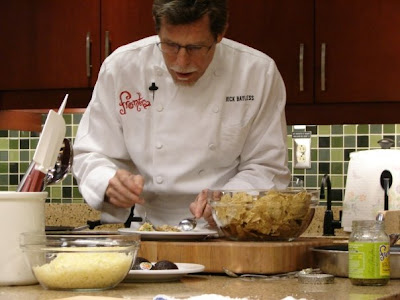 So jealous! I saw he was here in STL but couldn't make it. My husband and I went to Topolo in Dec. The best meal we've ever had!

Yay Kelly!!! So neat to be there. What a great friend and birthday present for your both. he he Thanks for the story and for the recipe. I love making his roasted salsas. They are so flavorful.
AmyRuth

Brittany (He Cooks She Cooks) said...

what a great experience! and thanks for sharing these awesome tips and recipes.