Last weekend, I saw the first apples of the season at my local farmers' market. I couldn't resist them. I decided I would make a tart tatin, something I'd yet to do.

And, it seemed easy enough...coat the bottom of a tatin pan (or cast iron skillet) with melted butter & sugar, let brown on the stove top, fill with peeled/halved/cored apples, top with puff pastry, and bake!

But, instead of following a recipe, I tried to improvise and adapt two different recipes. I think my recent baking success got the better of me. I should have just followed one of the recipes as written.

Dorie Greenspan's version says to melt butter in a tatin pan, then add sugar & apples. After the sugar browns, then you are supposed to top it with pastry & bake. Tyler Florence's version called for melting butter & sugar until caramelized, then adding cream and wine to make a caramel. This get poured in a tatin pan, topped with apples & pastry, then baked.

I pour this into the tatin pan and started peeling apples. As I was laying the apple halves into the caramel, I noticed it was starting to harden. But, I didn't worry about it...I figured it would melt when baked. 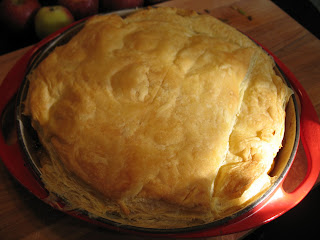 The finished tart tatin actually looked quite nice when I pulled it from the oven, all puffed & golden. 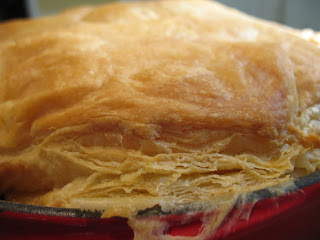 Dorie's recipe said to flip it onto a plate immediately, while Tyler's said to wait 10 minutes. I chose immediately...and when I did, liquid spilled out from the pan...all over the counter. Nevertheless, it looked good! The apples were tender and browned. The crust was crispy. Even the bits of hardened caramel left in the pan didn't bother me.

I let it cool for just a few minutes, then cut a slice. There was lots of liquid underneath instead of the thick, caramely sauce I expected. Ugh. The apples put off a lot of juice, I guess. 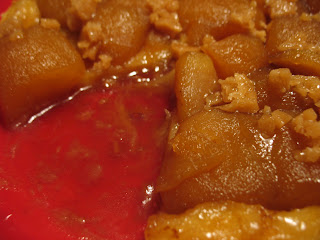 All in all, the dessert tasted good...like apple pie. But, I will try it again this fall...hopefully with freshly-picked apples from the orchard. And, I'll be sure to follow one of the recipes a little more closely.
at 8:33 PM
Labels: fruit, pie/tart, sweets

The secret to tarte Tatin is to caramelize the apples in the sugar-butter combination on top of the stove. Then the juice in the apples will boil away and concentrate the caramel flavor. I halve the apples and stand them on end, not slice them, so that they have a nice shape after the dessert is unmolded.

Ah! I'll try that next time!

I had planned to halve the apples, but they are very small and several of them broke into quarters when I cored them. ;-)

It made for a good breakfast with maple coffee, though!

Looks amazing!! I'm not a fan of apples except in desserts.