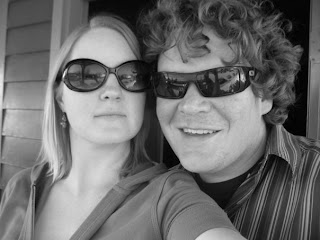 I'm getting married in 6 days.  Someone asked me recently if I thought I've rushed into it, having only been engaged for 4 months.  The answer is NO. Jerad and I talked about waiting until summer to get married but then decided there was no reason to wait, especially since Vegas would be pretty darn hot in June, and his cousin is already planning a wedding in the fall. There is really no point in waiting until next spring.

We've been living together for a few years now.  We never really "officially" started living together; he basically just started squatting at my house, staying more and more nights in a row until eventually he was there all the time.  In fact, just this week he finally changed his address. So, we figured that nothing is really going to change after we're married...except now he'll have health insurance and we can start thinking about a family. That right, folks, hell might just freeze over yet...we're talkin' babies! Not soon, but someday. I used to swear that I didn't want any kids, but I think I just hadn't yet found the right person to have them with. I do want to have babies with Jerad; he makes me feel capable and confident. Plus, I know he'll be a great pregnancy coach, father, & parenting partner.

Someone also asked me if I was sure that I wanted to marry Jerad. Absolutely! Sure, we argue (more like bicker & nitpick) sometimes, but who doesn't? Besides, our "arguments" are always over small things. We don't fight about the big, important issues. Sure, I've had a few moments of worry lately.  But, I think that's pretty normal right before you get married.  For me, I've worried only because I'm a little nervous about getting married again...not because I don't want to be married or because I don't want to marry Jerad, but because I don't want to get divorced again.  Apparently, I wasn't good at being married before. I just hope I'm better at it this time around.  And, you know, I think I will be...because Jerad is a better partner for me.

I know some people have doubts about our relationship; they think he's too young for me (8 years difference) or we're too different from each other.  But these people don't really know about the good parts of our relationship; they don't realize that while the past year has been challenging for us (mostly work stress that created home stress), there have been many good times too.  I'm not stupid, after all; I wouldn't marry someone I wasn't madly in love with. I'm not getting married just to BE married. I'm not that kind of woman. (At least, not anymore.)

Jerad is my best friend; I simply can't imagine my life without him in it...no matter what. I can't explain how well we get along and how much fun we have together.  He understands me with all my quirks & moods.  He calms my anxiety instead of causing it.  He protects me, takes care of me, and encourages me in whatever I choose to do.  He's proud of me.  He's quick to resolve any conflicts we might have.  He constantly makes me laugh. He does the things he says he's going to do. He likes to cook as much as I do, and he loves to experiment in the kitchen. In fact, it's one of our favorite things to do. We spend hours in the kitchen together, cooking & talking, eating & drinking. It's how we spend most weekday nights.

I haven't been posting much not because I've been too busy with wedding plans, but because I haven't been doing the cooking lately.  Since Jerad's been playing the role of "house boy," he has been making dinner.  He even does the planning and shopping.  Last week he fried some fish while I baked some mac & cheese.  He also made a traditional corned beef & cabbage dinner for St. Patrick's Day.  Now that the weather is warming up, he's grilling as well....marinated London Broil with roasted asparagus.  Hell, Jerad even had frozen strawberry orange cocktails waiting for me when I got home from work one day!

In my seemingly never-ending quest to find the perfect macaroni & cheese recipe, I took a little detour by just throwing a dish together for our fish dinner last week.  I didn't follow a specific recipe, but tried to make something that would still be creamy (but not soupy) after it was baked, but would also be good as reheated leftovers (without separating into a greasy mess like the last recipe I tired). THIS recipe was pretty perfect.  And it was pretty easy to make.  I even commented that I was excited to have kids so that I could make stuff like this for them & their friends. No blue boxed stuff for us! I plan on raising little food snobs. ;-)

You and Jerad are like peas and carrots and I'm so happy for you both. Keep doin' what you do. Love you both.

Many congrats! I have really only seen you together once (in that sushi class!) but I have no doubt that you are both a "perfect fit" (or at least as close to perfect as humans can get). Congrats! (and I am going to try this recipe of yours! I tried the tofu-like one from SAUCE and failed miserably! You need to do recipes for the dummy crowd too!) :D

Many congrats and well wishes! I have only seen the two of you together once (in that sushi class from a while back!) but I think you both make a "perfect fit" (or at least as close as two humans can get!). I am going to try this mac and cheese recipe -- I did try your newest one in SAUCE (the tofu-like one)but I failed miserably! You need to do a cookbook for we dummy types! :D Anyway, many congrats! :D

i was engaged for a year and a half and by the end of it we just wanted to be married already! congratulations! (and i would think your friends would have much more fun going to vegas for a wedding than for a bachelor/bachelorette party)!

Congratulations! Long engagements are for the birds. Be happy!

Oh wow 6 days, congratulations! I hope your wedding is gorgeous and everything you want it to be!

I do love reading your blog..Don't mind people saying that you are not good for each other. Who cares? I'm sure Jed loves you very much..I fell it in your story..well, Jed is very nice according to your share..Good luck for the both of you.

I hope your wedding is gorgeous and everything you want.Be happy.

I think you both make a "perfect fit" (or at least as close as two humans can get!). I am going to try this mac and cheese recipe -- I did try your newest one in SAUCE (the tofu-like one)but I failed miserably! You need to do a cookbook for we dummy types.

Well, I did try your newest one in SAUCE (the tofu-like one)but I failed miserably! You need to do a cookbook for we dummy types! :D Anyway, many congrats!

Baked Mac and Cheese is one easy dish to prepare. Could you suggest of a more fantastic recipe regarding it? I would like to try something new.

Here's a recipe for butter-poached lobster on orzo & mascapone cheese that is beyond delicious:
http://blog.kitchenconservatory.com/2011/02/13/the-most-romantic-dinner/

I've also made mac & cheese versions that include roasted butternut squash with smoked paprika. Marlena Spieler has a good cookbook of all mac & cheese recipes...lots of unusual things in there!