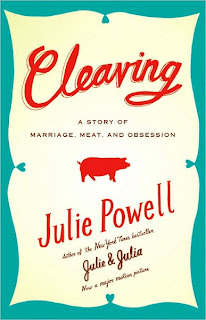 I’ve made no secret of my love and admiration for Julie Powell.  I think she’s one bad-ass bitch, and I mean that in the nicest way possible.

In fact, ever since I met her in Los Angeles last summer, I’ve been trying to figure out a way to make her my best friend…without creepily stalking her online, of course.

Anyway, I really liked her first book, Julie & Julia, when I read it in 2007, way before all the recent film hype.  I was very excited to read her second book, Cleaving, which was released in December.  Though, I confess that I wasn’t interested in the art of butchery so much as I was in the details of her extra-marital affair.


In Julie & Julia, Powell often refers to her husband as her soulmate; she calls him “my Eric.”  They seemed like the perfect couple, the kind who “finish each other's sentences,” who was meant to be together, who stuck together no matter what.  So, I was shocked to learn that she cheated on her beloved Eric, who very much comes off like a saint in her first book.  But, as Powell writes, “It turns out that things, even perfect things, pieces that seem to fit, to work together, can warp and crack and change.”

When I met Powell, she talked about her husband as if they were still married.  I thought they were divorced, based on an article about cooking for one Powell wrote for the New York Times in April, 2006.  So, I was confused but didn’t think it was appropriate to ask her if she was still married.

I got my answer in Cleaving, a book all about her affair, her separation, and her redemption through meat.  Well, through butchery.  (Is Julie Powell divorced? I’m not going to answer that for you; you’ll have to read the book yourself.)

One of the things I like best about Julie & Julia is Powell’s voice; she’s not as whiney & annoying as she’s portrayed in the film.  Instead, she’s independent, forward, emotional, and out-spoken.  She’s simply raw.

When I asked her what she thought about how Nora Ephron altered her character in the Julie & Julia movie, she said, “It’s a PG-13 romantic comedy.  They sweetened me.  In real life, I’m rated R.” In a USA Today interview last November, Powell said, " [Amy Adams] captured the drive that I felt and the reason behind the Julia project. I did have to get my head around the fact that someone so perky and sweet and lovely would be playing me, because I'm not particularly sweet."

In Cleaving, Powell might be going for an X-rating with her uncensored descriptions of afternoon trysts, S & M, drunken one-night stands, unabashed flirting, and sexual assault.

Amidst the sexcapades and emotional turmoil are narratives of Powell’s experience as an apprentice in a butcher shop.  She uses anecdotes about dissecting massive amounts of meat as metaphors.  According to Paula Forbes on Eat Me Daily, “It is, essentially, the act of breaking down an entity into smaller, more manageable pieces. […] But in the end (spoiler!) Powell realizes that dividing everything into smaller parts can only do so much, and she has to examine her life as a whole to find peace.”

Cleaving has gotten a number of negative reviews, calling the book too honest, unpleasant, mind-numbing, “skanky and tawdry and silly.”  Of course, as with her first book, she is called narcissistic as well. Powell has never tried to conceal her narcissism.  In fact, she embraces it. Her own blog tagline even reads: “Musings from a ‘soiled and narcissistic whore’.”

Some critics didn’t like the fact that she enjoyed her affair or that she was honest about her feelings.  They seemed to be critical of the very aspects of memoirs in general; I mean, let’s be honest…memoirs by their very nature are selfish.

Powell is unapologetic about her affair and subsequent obsession with her lover.  But, critics shouldn’t be so quick to judge her negatively.  Husband Eric wasn’t just the innocent victim here; he had an on-going affair, too.

However, many critics do agree that Powell is a talented writer, they just didn’t seem to like her topic or her candor.

I think Forbes put it best when she wrote:


In truth, the food world can be a bit too clean. The internet drips with pristine and lovely pictures of fairytale cupcakes, caramelized roasts and vibrant bins of farmers' market produce, and apart from the masculine bravado of Anthony Bourdain and his acolytes, it can get a little cloying. Life is messy; food is messy. Above all, heartbreak is messy. Powell's book is messy, and even more, it's messy without glamorizing the mess. It's a real trainwreck that at times is very uncomfortable to read.

(You can read the beginning of Cleaving here.)
at 12:51 PM
Labels: reading, reviews

I loved this book, too. I rarely read a book where the author lays it all out there without apology, and it was incredibly refreshing. Plus, she has an uncanny ability to make me laugh even when talking about meat and affairs. A lot of people have condoned her for her comments about food bloggers, but all I know is that I love her writing.

I had a much lower opinion of the book and of Ms Powell.

What she did to Eric throughout the book was reprehensible.

And I have a different take on Eric's affair. His was (or so it seems to me) in retaliation to hers. He seemed to regret his - and while I can't speak for anyone other than myself I have to say that I wasn't necessarily that she enjoyed the affair but that she was so cruel about it.

I don't think I need to go into any of the details, do I?

A second layer of cruelty could only the book itself. What must it be for Eric now, knowing that anyone reading the book (and that would include any friends of his) now knows the extent of his humiliation?

And I wasn't too impressed with her writing, either.

I didn't see Powell as being cruel at all. Sure, it was a painful experience for both her and her husband, but I don't think she was trying to be cruel. She talks about her love for her husband throughout the book.

As far as the book itself, of course Eric gave her his blessing to write and publish it...so, it's not selfish at all. That's what writers too, especially writers who write memoirs...they put themselves out there, naked and vulnerable. And I say, more power to them! It's something I don't have the guts to do, that's for sure.

Since you've read CLEAVING, you know how it ends...and it seems to have worked out for both of them in the end. Sure, how they got to their ending is maybe not how you or I would do it, but at least they did get there.

Her writing is witty and descriptive, there's no denying that As I said, most critics agree that she is a good writer. Stylistically, of course, "good" is a matter of opinion. I for one like her writing style and her voice...and having a masters degree in literature, I do know something about evaluating style, metaphor, theme, etc.

On a personal note: I've just glanced at your blog. Creating a blog to do nothing but bash another person is in itself a "cruel, thoughtless, and selfish" thing to do.

CLEAVING is just a memoir. If you don't like it, stop reading or don't read anything else by that author. That's your power as a reader. Your blog is completely unnecessary and downright ignorant.

I really can't see how her actions regarding her affair with D are anything other than cruel. How is it not cruel, for example, to have an affair in the first place?

But beyond that, how is it not cruel invite your lover over to your house and make out with him while your husband sleeps unknowing in the next room?

How is it not cruel to continue the affair and force your to ask his wife "are you coming home tonight?" knowing that if the answer is "no" he'll know you're sleeping with your lover?

How is not cruel? How is that not reprehensible behavior?

A compassionate person would have pulled the plug on the marriage. But she didn't. She forced Eric to sit through it for more than two years.

As for my blog, there's little if anything there that isn't in the book. If pointing out that stuff makes Ms Powell's fans uncomfortable, so be it.

No, I don't see that as cruel. THEY worked it out, eventually, in the way that was best for them in the long run. That's more than most couples can say. It's not for me to judge Julie or Eric or anyone else on how they handle their marriages.

And, not all affairs are cruel. Sometimes they happen and it ends up being the best thing for all parties involved. Sometimes, they end horribly.

But, affairs do happen...because people are sometimes weak and needy, and sometimes they are just trying to figure it all out. We all have to do what we feel is right for us, even if it turns out to not be right later. And sometimes, our feelings and desires get the best of us.

Your blog doesn't make me uncomfortable. I just think that IT'S cruel and uncalled for. As far as I can tell, you don't know Julie Powell personally, so why all the hate and judgment?

The book offended me. Greatly. So why shouldn't I speak out about it? Or are only positive reviews of the book and her actions allowed? If that's the case you shouldn't bother reading the customer reviews at Amazon.com or Barnesandnobles.com or Borders.com or the professional reviews at NPR or the Village Voice and so forth.

But I understand you feel you need to defend Julie Powell. And that's OK. I don't.

And if you read the ending of the book carefully (and this, I believe, is backed up by interviews with Powell herself) that they have NOT "worked it out". She's said the book ends on a "wait and see" note.

Here's a little thought experiment. Had Eric done all the hurtful (and this is Powell's own description by the way) things to Julie that she did to him, would you be as forgiving?

Of course, negative reviews are allowed. I've read them and even quoted from a couple in my post. But, let's be honest here, what you are doing is not simply writing a negative review. You've created an entire blog to bash one person. That's a bit much.

I interpreted the ending much differently than you. While things weren't all peachy at the end, I did see some hope and healing there.

My opinion is not about forgiving; I don't know either of these people personally. It's about appreciating her blunt honesty.

Would I feel differently if the roles between Powell and her husband were switched? I don't know, because that's not what happened. It would, of course, depend on circumstances and reasons and feelings and everything else involved. Either way, though, I'm not that into judging what others do in their private lives, especially when it comes to marriages. I, for one, know how messy and complicated and heartbreaking marriages can be.

So, in the end, it just seems that you and I have different opinions. To each their own, I guess.

I don't know, Jody. I can see being offended by Julie's affair. No one wants to get cheated on. I doubt Julie is condoning her actions, rather simply telling her story. Be offended, sure, but the whole hateful website thing? I think you're taking it too personally.