We got our wedding bands, simple white gold bands, from Agha Designs in Alton.  They also designed my engagement ring, which will soon be featured in Flair Magazine, a feature in the Alton Telegraph.

He finally picked up the rings on Friday, and we decided to go ahead and read what we’d written.  Surprisingly, we chose the same song quote!

I’m always still shocked by how much Jerad and I think alike…and by how well he knows me.

On Saturday evening, I told him that I was going to make a treat while he was at work that night.  “Are you baking a raspberry cheesecake for me?” he asked.

“Ok,” he said with a smirk, “Are you making raspberry cheesecake bars then?”

I couldn’t help but laugh! How’d he guess that?  Because I know what he likes, and he knows how I think.

I’m one lucky girl, and I need to remind myself of that more often. 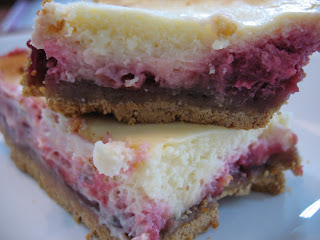 * Strawberry or blueberry jam/fruit would also be good.

wow these look amazing! I know how much work a cheesecake is, I made my first in december - these look like they taste just as good, but with a little less work? I hope!

Yes, Nicole. They ARE way less work and taste just like cheesecake. I'm not sure I'll ever make a "real" cheesecake again! ;-)

Very sweet post...story and cheesecake bars!! My Hubs loves cheesecake too, but I'll admit I've never attempted to make it myself. Thanks for the recipe, these might just do the trick. Congrats on the upcoming wedding too!