A Rant at Ruhlman & A Sour Cherry Clafouti


what summer looks like to me, photo by donna: http://blog.ruhlman.com/
10:07 AM Jun 25th from TweetDeck


The link to his blog featured a post titled Cherries Are Here! with a close-up picture of cherries on a tree and the caption "One of my favorite times of year, sour cherries are here! Thanks for gorgeous shots Donna. Time to make pie!"

Five minutes later, my friend Steph (aka Iron Stef) replied to Ruhlman's tweet with a link to my recent sour cherry cocktail recipe:


cherries from a neighbors tree, pits pop right out, love the sour cherry cocktail idea. think i may need to come down with some writers bloc11:24 AM Jun 25th from TweetDeck


Noticed that he used the words the and idea--"love the sour cherry cocktail idea--as if he had read Steph's reply. I then replied to Ruhlman:


it's writer's block time! have posted a sour cherry cocktail to confound those who insist on being productive! http://blog.ruhlman.com/
4:02 PM Jun 25th from TweetDeck


His previous "Cherries Are Here!" blog post now included a cocktail recipe similar to a mojito made with muddled cherries, rum, & simple syrup.

While it's not EXACTLY my recipe--which was inspired by Annie's recipe and which I clearly credited in my post--I think it's fairly clear from the Twitter updates that Ruhlman got the idea for a sour cherry cocktail from the link Steph sent.

So, I'm a little miffed that he didn't have the courtesy to credit either Annie or me for the inspiration. Did he plagiarize? No, of course not. But it IS nice to at least include a link to where you got an idea for a recipe even when you adapt that recipe.

I know that there are numerous websites out there that blatantly steal blog posts, pictures and all. I know that Ruhlman posted a different recipe, but it just seems to me that he got the idea from us. I would just like a shout-out from him, since he's a big guy and we're just wee little guys. Some blog love would be much appreciated.

ANYWAY...I still had cherries left and since I can't live on cocktails alone, I finally made a clafouti. Clafouti (pronounced kla-foo-TEE) is a French dessert of fruit--traditionally cherries--baked in a custard-like batter.

Sour Cherry Clafouti
(adapted from Ina Garten's Barefoot in Paris)
[See how I gave credit to my source?] 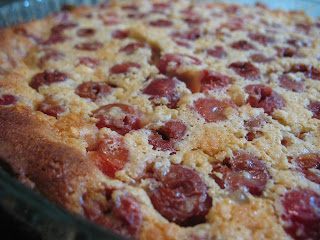 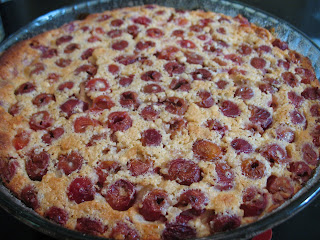 I hate when that happens! He should know better. The drink sounds great, by the way.

I saw that go down on twitter and thought the same thing--that he was kinda stealing your guys thunder. I bet you get some attention now...He seems like the type of guy that will right the wrong. Guess we'll see.

Now you got yours! You won the contest. The fates thought you deserved better than whatever it was Ruhlman was up to. Congratulations!