Not all of my kitchen experiments are successful.

For example, on Friday I decided that I wanted to do some cooking to use up the produce I bought at the farmers market on Wednesday. So, I invited people over for an impromptu party and planned on trying a few new recipes.

I also planned to use the tiny patty pan squash with blossoms still attached, stuffing the flowers with herbed ricotta & deep frying them squash & all. But, all the other cooking took longer than I had expected so I never got around to making those.

I had wanted to try roasted some chickpeas, a recipe I keep seeing, and I had been eyeing Nigella's cocktail sausage recipe for a while. The green tomato tart was an idea I had to use up some of the green tomatoes in the fridge.

And, I wasn't too happy with any of these recipes.

Despite my roasting the chickpeas (which were coated in olive oil & garam masala seasoning) for over an hour at 400 degrees, the beans didn't get crunchy. Sure, they tasted okay, but I hoped they would be really crunchy like nuts.

Nigella's sausages (standard cocktail weinies baked with a glaze of sesame oil, soy sauce, and honey) tasted good but they too took longer to cook, to get sticky with the glaze, than I expected. And as they cooled on the table, they became encased in a pool of congeled fat...not the kind of appetizing snacks I had planned to serve my guests.

The green tomato tart was soggy in the middle, mostly because of my errors. I parbaked the puff pastry, like I recently did with an asparagus tart, to prevent it from getting too soggy once I added the toppings. However, I forgot to dock the dough so that it didn't puff up in the middle. Nevertheless, I pushed the dough down after about 10 minutes of baking (though, I should have let it bake for 15 minutes), added caramelized onions, thin slices of green tomato, a sprinkling of salt/pepper/dried oregano, and fresh mozzerella cheese. While the tart looked good, the middle was so soggy it was difficult to cut & serve. I think I sliced the tomatoes too thickly, and their juices made the tart too wet. I should have used a mandolin to get paper-thin slices instead.

But, at that point, I was a few strawberry vodka & lemonades (and at least one "dirty Palmer") in to care all that much.

Out of all the dishes I made that day, the best ones were the roasted carrot dip & the gooey brownies (check back tomorrow for THAT recipe). 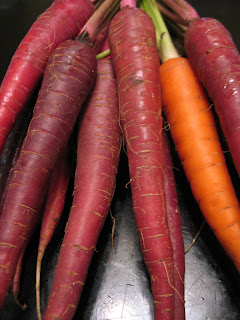 I bought some gorgeous purple & orange carrots at the farmers market. Some of them were a deep purple all the way through, while others were purple outside but orange inside. I wanted to make something that would showcase the vibrant colors, so I decided to make a version of a roasted carrot dip I found on A Veggie Venture.

at 10:55 AM
Labels: snacks, vegetarian, veggies

Congratulations on being selected by Steamy Kitchen to report on the Julia and Julie movie!! I look forward to reading your report and it's especially exciting to have a fellow TWDer win. I love the carrot/cumin combo, your dip sounds great. Now I have to go make my brownies to tomorrow's TWD post.