Foodbuzz sponsors a monthly event that features 24 bloggers from 24 cities around the world who prepare unique meals during the same 24 hours. Earlier this month, I submitted a proposal for a meal inspired by Ernest Hemingway's memoir of 1920's Paris, A Moveable Feast...and my proposal was chosen! 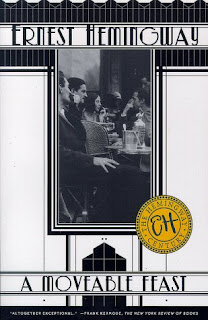 "If you are lucky enough to have lived in Paris as a young man, then wherever you go for the rest of your life, it stays with you, for Paris is a moveable feast."
-Ernest Hemingway, to a friend, 1950

A Moveable Feast is Hemingway's story of living as an expatriate writer--part of what fellow writer Gertrude Stein termed "Une Generation Perdue," The Lost Generation.

"You are," she insisted. "You have no respect for anything. You drink yourselves to death. . . ."

Though not a cookbook or food memoir, Hemingway's narrative includes many descriptions of the things he drank and ate in friends' homes and in various French cafes. 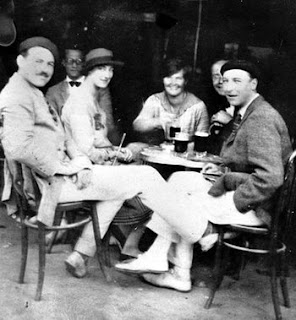 Though I originally planned to have dinner outside to emulate a Paris cafe, the heat index in St. Louis was over 100 that day, so I moved the meal inside. I tried to create a cafe feel with red plates, mismatched wine glasses, & an Eiffel Tower lamp on the buffet!

My wife and I had called on Miss Stein, and she and the friend who lived with her had been very cordial and friendly and we had loved the big studio with the great paintings. It was like one of the best rooms in the finest museum except there was a big fireplace and it was warm and comfortable and they gave you good things to eat and tea and natural distilled liqueurs made from purple plums, yellow plums or wild raspberries. These were fragrant, colorless alcohols served from cut-glass carafes in small glasses and whether they were quetsche, mirabelle or framboise they all tasted like the fruts they came from, converted into a controlled fire on your tongue that warmed and loosened it.