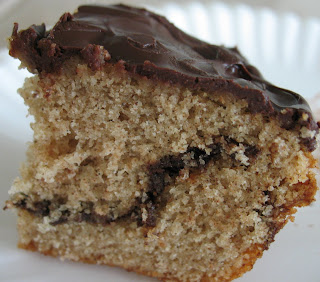 I'm renaming this week's Tuesdays with Dorie recipe and calling it "Cinnamon Espresso Cake," because "Cinnamon Squares" sounds too generic and plain to me. And, this cake is anything but plain. It's a moist (contains over a stick of butter in the batter!) cinnamony cake baked with a layer of grated dark chocolate, cinnamon, sugar, & espresso powder in the middle and topped with a smooth icing made by melting dark chocolate & butter together.

And, the best part? It's an easy cake to make...hand-mixed, baked in a square pan, then iced on top.

Thanks for baking with me this week! Love your post :) Your cinnamon espresso multiple orgasm cake looks terrific!

Your Cinnamon Cake looks tasty! (And it looks like it might have had one of those orgasms because it's smiling!)

Multiple!!! Wow!! It must have been good. It looks really tasty.

Looks good. Have you tried real Cinnamon in your recipe.