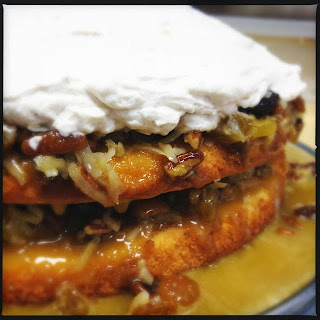 As you might have guessed from my previous post, I am single...again. Corey and I broke up a couple months ago. It's been really, really hard. Though we are keeping in touch and are friendly to each other (it wasn't necessarily a "bad" breakup), I miss him. A lot.

I'm getting better, though. I'm taking it day by day. Some days are, of course, better than others. I'm working through some of my own issues, keeping busy, and trying to figure out that thing called "happiness."

I haven't told many people about what's been going on...and while I don't usually tell my students much about my personal life, they can tell something is wrong. I've gotten many "hope you feel better" and "don't be sad" messages from my juniors and seniors. I even got a few "we love and need you" messages. One of my classes gave me a group hug; the other made me a huge Frankenstein card with sweet sentiments like "you're beautiful" and "boys are stupid." ;-)

I simply wouldn't have made it through those first couple of weeks without them. They made me feel not-so-alone and valuable when I was feeling very alone and worthless. I love them. I really do.

So, to say thank you, I'm baking cakes for two of my classes. One class recently read To Kill a Mockingbird, and I remembered seeing a recipe for Miss Maudie's Lane Cake on Yummy Books...so I decided to try it.

In the novel, Scout's neighbor Miss Maudie is famous all over Maycomb for her Lane Cake, and she bakes one for Scout's visiting aunt. Scout describes the cake as "so loaded with shinny [liquor] it made me tight." (Upon taking a bite, one of my students inquired, "Is there booze in this?")

Cook's Country describes Lane Cake as "a tall, fluffy, snow-white cake filled with a rich, sweet mixture of egg whites, butter, raisins, and 'a wineglass full of good whiskey'." They explain that the cake "gets its name from Emma Rylander Lane of Clayton, Ala., who first published the recipe in 1898, after it won the blue ribbon at a county fair in Columbus, Ga." While the recipe was well-known in Alabama, it became famous across the country after it was mentioned in Harper Lee's 1960 novel.

I followed the recipe on Yummy Books, so I'm not going to post it here. Her recipe makes a stunning 9-inch, 3-layer cake. I halved everything, making an 8-inch, 2-layer cake. My version didn't rise very much, the filling (a rich egg-yolk concoction with pecans, coconut, raisins, and bourbon) was a bit runny, and the cake wasn't as pretty as hers. Still, everything tasted delicious.

The recipe calls for making a stabilized whipped cream icing. I'd never done this before and am impressed with the results. Basically, you add some bloomed & heated gelatin to heavy cream as it's whipping to prevent melting. Even after sitting overnight, the icing held up beautifully.

Next week, the other class is getting a German Chocolate Cake...as requested by one of the students. Stay tuned!
at 6:23 PM
Labels: cakes/cupcakes/muffins, desserts, reading, sweets