There's been an on-going debate among St. Louis bloggers about slingers. A regional mid-western specialty, a slinger is a breakfast or late night diner dish that consists of hash browns topped with a hamburger patty (or sausage, bacon, or ham), chili, eggs, cheese, and onions. It's, quite frankly, a big ol' plate of mess. See?

I decided to throw my hat into the slinger ring, so to speak, to show some local enthusiasts how easy it is to make--and to update--this dish at home...layer by layer:

My chorizo & black bean slinger started with thinly-sliced potatoes that I cooked in a large skillet with a couple tablespoons of extra-virgin olive oil. I used one medium-sized potato per person, sliced with the skin on. When they were browned & crispy, I drained them on paper towels, then divided them up among the plates. 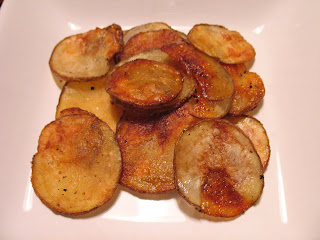 I topped the potatoes with cooked Mexican chorizo. 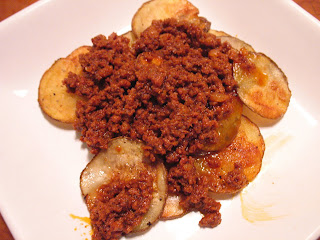 Next was the the chili, which I made by simmering black beans with a can of diced San Marzano tomatoes, sliced fresh jalapeno, chopped onion, and minced garlic seasoned with ground cumin, smoked paprika, dried oregano, salt, & pepper. I let this cook on the stove until the beans & veggies were tender & the chili was thickened. 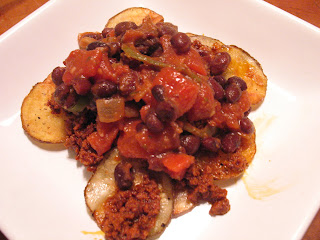 I sprinkled the chili layer with some shredded Manchego cheese. 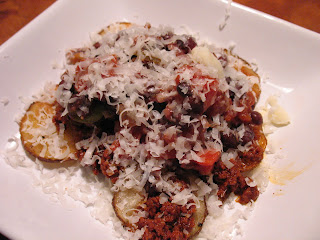 One egg, sunny-side-up, with a couple pinches of fresh chopped chives topped each plate. 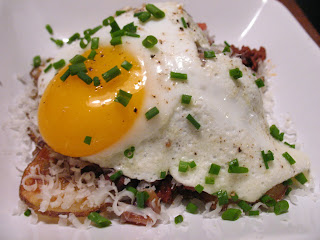 The result: Delicious. A satisfying combination of flavors and contrasting textures. THIS is easy and tasty. Make it.

I've never had a slinger and had no idea what it was until I moved here haha.

Man, this makes me want to get drunk so that I can eat one of these at three in the morning. Or maybe as soon as I get hold of some chorizo. Looks amazing!

I've never had a slinger either! But I like Jon's way of thinking, lol! This dish looks fantastic!