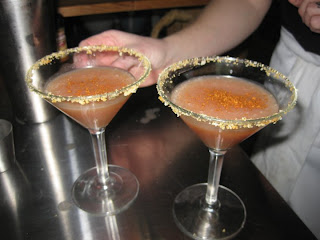 3. Stir in 1/4 cup heavy cream and cook just until the cream is warm. Serve over penne noodles.
at 8:31 AM
Labels: booze, pasta/noodles, pork

Wow! Bacon vodka? I've never heard of it, but I'm really impressed. Sounds weird, but amazingly good. The recipe is nice too - bacon vodka is brilliant in it. Thanks.

I've never tried that kind of sauce before. It's very unique but it actually looks good. Thanks for sharing.