Today is our 6th snow day in 2011. We haven't had a full week of school yet this semester. You'd think that with so many days off, stuck in the house, that I would be super productive. You'd be wrong. I tend to increase my laziness on impromptu vacation days. Instead of catching up on grading, reading more, cleaning, or doing laundry, I tend to zone out in front of the computer or piddle around in the kitchen.

And, you know what? I don't feel bad about that at all.

Last weekend, knowing that a snowpocalyse was approaching St. Louis, I planned a few cooking projects for the week...involving comforting winter recipes that are healthier than my usual carb-loaded cold weather fare.

The first of those recipes is a winter panzanella. Panzanella is a summertime salad made with toasted bread cubes, ripe tomatoes, garden-fresh basil, & soft mozzarella cheese. It is our favorite thing to eat in the summer. Of course, the pale, mealy tomatoes you find in the winter will just not do in a salad. So, I found a more seasonally-appropriate version that replaces the tomatoes & basil with radicchio & brussels sprouts. Crispy bacon & crunchy apples are added. It's really delicious, filling & comforting. 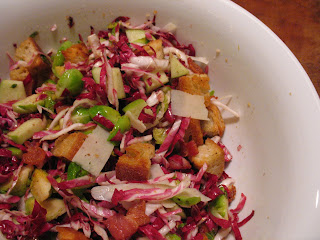 * I used a roasted garlic loaf from my supermarket's bakery & omitted the garlic clove.

To make the salad: