Let's face it: Valentine's Day sucks...and it doesn't matter if you're in a relationship or not. While I like getting gifts as much as anyone, I don't like the pressure of having to do something romantic for V-Day. Going out to eat is out of the question for us, as it's usually so crazy-crowded at the restaurants. It just feels like such a forced holiday.

So, this year, I decided to have an Anti-Valentine's dinner party for a few friends. For decorations, I set a vase with three long-stemmed red roses in the middle of the dining room table. Then, I cut the blooms off and left them laying on the table. I also set out a heart-shaped box of chocolates for my guests...after I'd taken a bite out of each one, of course. I called my appetizer course--a chunk of bleu cheese--"Love Stinks." I made Red Hots infused vodka as an aperitif.

I asked my guests to bring an appropriately unromantic dish to share...something bitter, sour, spicy, or otherwise un-love-ly. 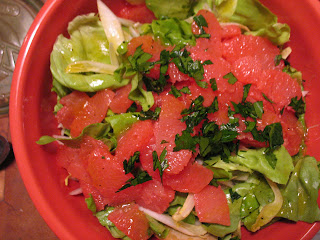 Colleen brought a grapefruit & fennel salad with parsley & mint (no need to worry about whether or not you have green bits stuck in your teeth!) 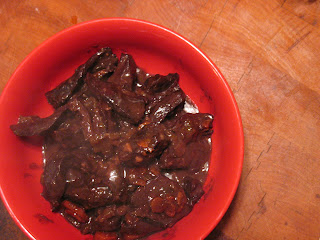 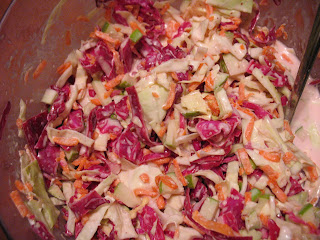 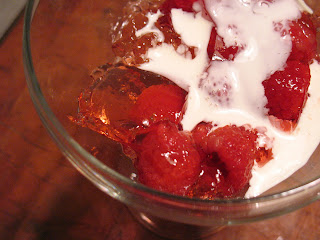 Stephanie made Nigella Lawson's "Slut-Red Raspberries in Chardonnay Jelly" with a bit of heavy cream for a little extra naughtiness.
My contribution was Angry Lobster, a dish I'd been eyeing for a while. The recipe calls for killing & cutting up live lobsters before cooking the large pieces in a spicy, buttery sauce. Since homicide is VERY anti-Valentine's Day, I made my guests murder & dismember their own lobsters.

These lobsters were beyond angry...they were down-right PISSED OFF. And extremely feisty. The little buggers kept moving and flapping even after they'd been hacked into pieces. The pieces were even still twitching as they were being cooked. 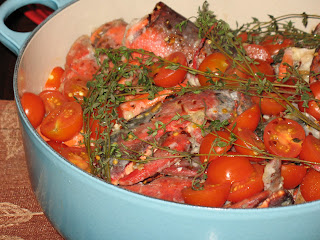 According to Tyler, "the dish takes its name from the way the lobsters get whacked."
serves 4 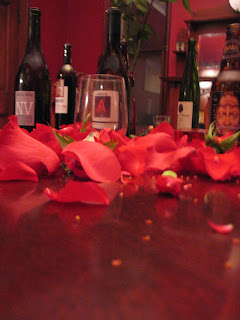 You know it's a good party when the table is covered with empty wine bottles & rose petals by the end of the night.
at 4:05 PM
Labels: holidays, seafood

Yum! And I must say, you do appear to have gotten past the distaste for lobster murder you displayed that first time at my apartment in Lafayette Square. I'm still proud of myself for being the One Who Did It. I did feel bad a few months ago when I read David Foster Wallace's essay. Felt bad for a minute, that is.